Update: We recently analysed 13,000 data points to find out what developers are being paid across Germany today. In short, we found that the average developer salary across Germany is €63k.

To get the full report and learn more about developer salaries in Germany, check out our report here.

Germany is a great location for developers to find jobs. A developer survey done by Stack Overflow for the year 2017 lists the highest paid programming languages and IT jobs in Germany: 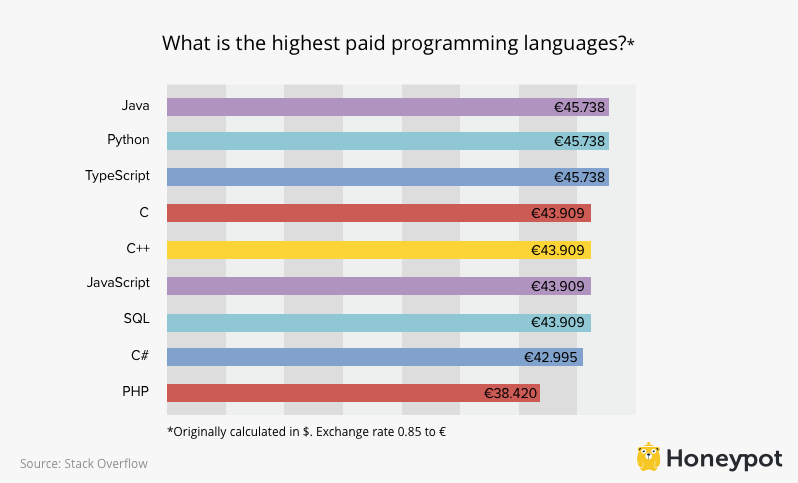 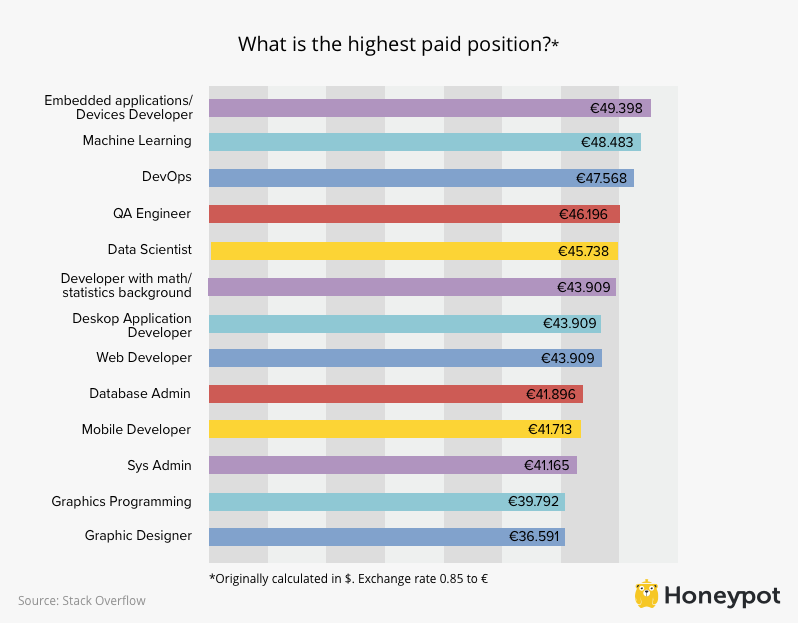 According to PayScale, the median salary for a software developer in Germany in 2017 is €46,163 a year. For a more detailed breakdown of developer salaries in Berlin, check out one of our previous posts.

Along with a high salary, Germany offers foreign developers the chance to work in English.

Jobs for English-speaking developers in Germany

Germany was ranked by Education First as the ninth best country for English proficiency in the world. Here’s how some of Germany’s major cities including Cologne (Köln), Stuttgart, and Düsseldorf stacked up in percentage of proficient English speakers per city:

Stuttgart was ranked ahead of Hamburg, Frankfurt, and Berlin as the second best city for IT jobs in Germany by Jobspotting. Stuttgart’s high median developer salary is certainly attractive:

This beats the German-wide median by more than €3,000 annually.

Java Developers earn on average €59,180 a year in Stuttgart, with a median income of €55,000. This means that being a Java developer in Stuttgart will earn you €10,000 more a year than the average developer there.

We see a drop in median salary when looking at Cologne:

Cologne ranks in the top three of English proficiency when compared to other major German cities making it an especially good destination for non-German speaking developers.

As the host of Gamescom, Cologne is a huge Mecca for gamers. A chance to test out games before anyone else, while taking part in cinema style trailer screenings, attracts more than 350,000 attendees every year.

Median developer salaries in Düsseldorf are €1,700 more a year when compared to Cologne:

Best IT job in Düsseldorf

Software Engineers can expect a high median salary of €50,421 when working in Düsseldorf.

Düsseldorf comes in last for English proficiency among major German cities. However, as it is only 1 or 2 percentage points behind tech cities like Berlin or Stuttgart, this difference isn’t a deal breaker.

Cologne, Stuttgart, and Düsseldorf have all seen tremendous growth in their demand for developer talent. However, Stuttgart stands out due to its high salaries, solidly ranked English proficiency level, and the jobs security and stability provided by large corporations headquartered there.

Listed on EU-Startups Top 10 startups to watch in 2017, our mission is to get every developer a great job. The ability to compare job offers side by side while stating your preferences and only getting relevant offers makes Honeypot one-of-a-kind. Visit us here 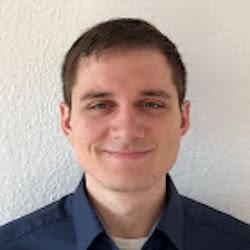