5 of the Greatest Contributions by German Computer Scientists

Though Germany is known for it’s strong manufacturing industry, most would be surprised to learn some of computing’s greatest innovations come from the country. A German developer today has a lot to be proud of, as the list of German computer scientists, inventors, and visionaries shows! Here are five of their most exciting contributions.

Binary is the foundation on which our digital world is built. Inspired by Chinese I Ching, Gottfried Wilhelm Leibniz devised the version of binary we use to this day. Base 2 binary has only two possible values 0 and 1. The standardized counting system we use around the globe is base 10, because there are 10 possible values. A Base-2 binary system is suited towards a computer because each of the many circuits in a computer have two states: on and off. Leibniz is one of the most respected German computer scientists ever.

In complete isolation, Konrad Zuse completed the first electromechanical programmable computer in 1941. Zuse, who was bored by routine calculations, set out to build a machine that was capable of doing these for him. His completed “Z3” was able to do basic math and was programmable with punched film. What’s truly remarkable about Zuse’s invention is that he managed to build it with scarce resources during wartime. Unknown to Zuse, there were other people around the world attempting to build a similar calculating machine but the standard methodology relied on a notoriously unreliable rotary decimal system. By contrast, Konrad built his own from the ground up using a floating binary system. He went on to found the world’s first computing company which is largely recognized as the world’s first startup.

Born out of the desire for a more secure credit card, German inventors Jürgen Dethloff and Helmut Göttrup spent nine years developing the chip card. Their card, which contained a built in programmable microprocessor, is the ancestor of our mobile, credit, and debit cards, and even the chips in our passports.

The Fraunhofer-Institute, led by the renowned German computer scientist, Karlheinz Brandenburg, developed the MP3 when they were originally working on a way to increase the quality of phone calls. At first they developed a refrigerator sized machine that was able to reduce file size to 8% of the original, but they quickly realized that that really wasn’t convenient and that they needed and algorithm that could do the same thing. Using Suzanne Vega’s infamous pop song “Tom’s Diner,” as a reference, Brandenburg eventually cracked the algorithm after tens of thousands of listens. Compared to the CD, the mp3 offered up to a 90% reduction in data. Whereas the CD could store 74 minutes of audio, the most basic of mp3 players could hold 74 hours of audio. 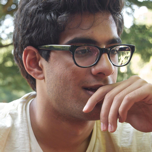 Kamal is Honeypot’s online marketer. As a tried and true music nerd, he’s at his best with his headphones on.