The 10 most exciting open source projects of 2018

As a bunch of self-confessed tech addicts, there’s nothing we love more than to dissect the latest GitHub repositories in search of interesting open source projects, and we’re constantly amazed at the sheer volume of new additions and the united manner in which the dev community gets behind them.

So, what open source projects are making waves in the tech community in 2018?

Towards the end of 2017, Github released a research piece in which it identified cross-platform development, deep learning and containerisation as the top open source trends they predicted to thrive in 2018.

Now that we’re a quarter of the way through the year, let’s take a closer look at the open source projects that have been getting some much-deserved recognition in 2018, figure out what makes them so exciting to developers and determine to what extent they confirm Github’s predictions.

Without any further ado, here are the 10 most exciting open source projects in 2018, as selected by Honeypot.

An open-source machine learning framework for dataflow programming developed by the Google Brain Team back in 2015, TensorFlow has been gaining a lot of traction in recent months given the rising interest in deep learning and neural networks.

At its core, TensorFlow enables programmers to deploy computation to one or more CPUs or GPUs in a desktop, server, or mobile device without rewriting code, and is used by Google for speech recognition, language translation, photo search functionality and multiple other purposes.

As illustrated by the recent introduction of TensorFlow mobile as well as the release of TensorFlow 1.7 in March 2018, TensorFlow is continuously evolving and looks set to become the market leader in terms of integrating new ML functions and libraries. 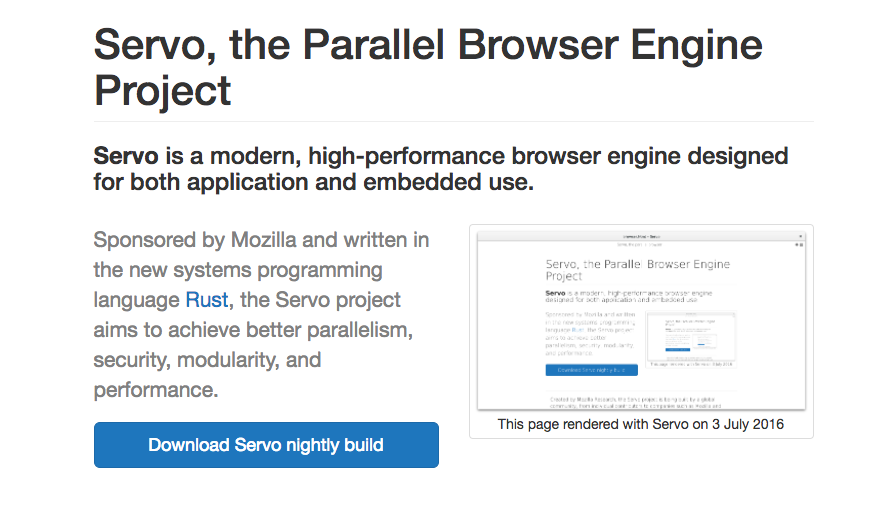 Up next we have Servo, a prototype web browser engine written in Rust and initially revealed by Mozilla in 2013.

Since last year, Mozilla have started integrating components of Servo, such as Quantum CSS (previously known as Stylo), into what they call Project Quantum, a major rewrite of Firefox’s internals. These integrations aim to achieve better parallelism and performance, and make Firefox a more responsive, secure and stable browser. 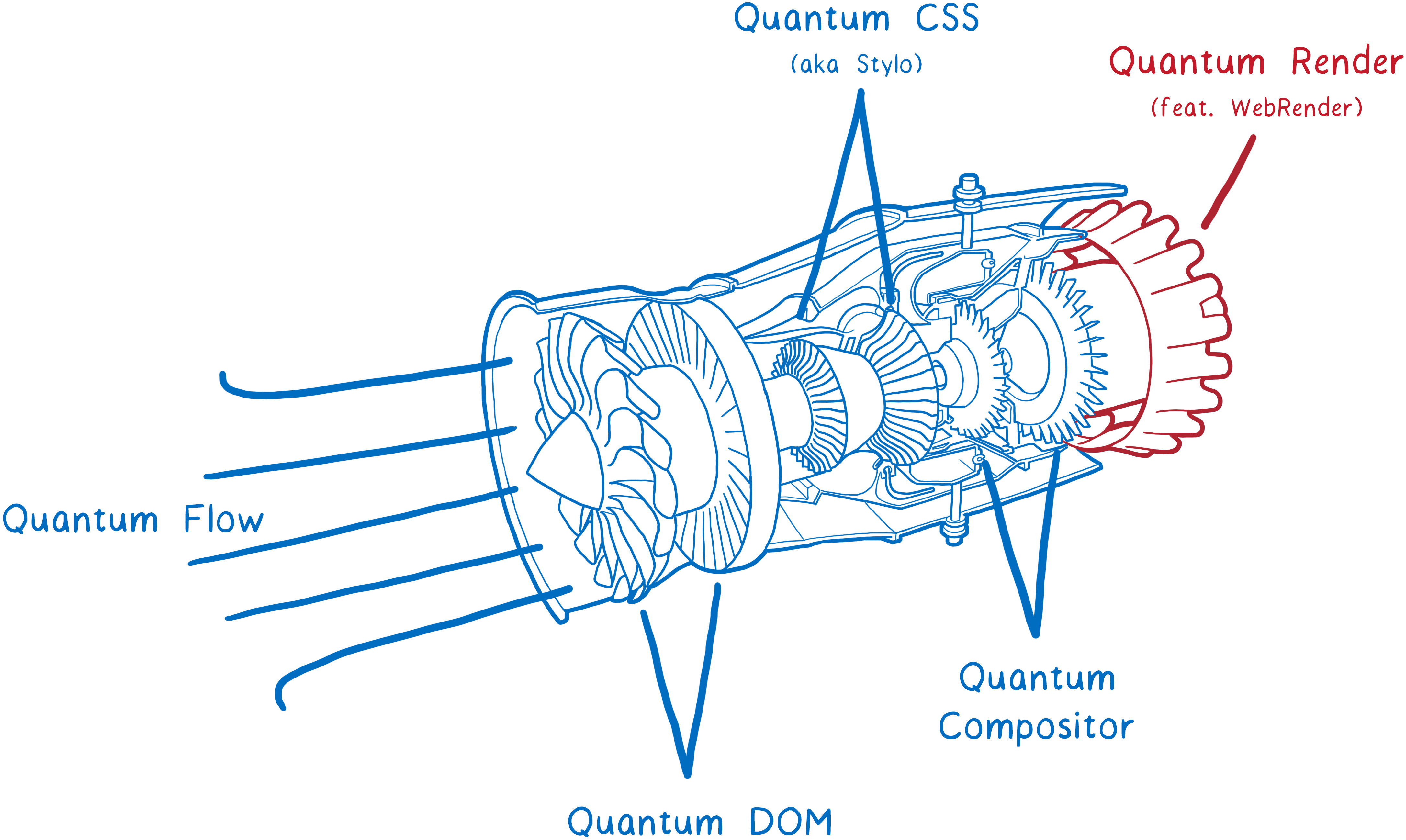 A particularly exciting component of Servo that’s been integrated into the nightly build of Firefox is WebRender, a GPU renderer that intends to make rendering faster and smoother. But what’s even more noteworthy is that it actually works! In fact, pages that chug along at 15 frames per second in Chrome run at 60 FPS on Firefox with WebRender!

Seeing as it’s universally considered to be one of the most prominent JavaScript frameworks on the market and its GitHub page has racked up over 90,000 stars, we couldn’t possibly not mention Vue.js.

Vue.js ticks a lot of boxes, it uses a virtual DOM for better performance and incorporates declarative rendering, but what makes it particularly exciting is that it supports the component-based approach of building web applications.

Vue.js has been learning from the past mistakes and successes of React and Angular and looks certain to become increasingly popular in 2018.

According to the Googlers who initially designed it, Kubernetes is a portable, extensible open-source platform for managing containerised workloads and services, that facilitates both declarative configuration and automation. Put simply, Kubernetes allows programmers to easily and efficiently manage the lifecycle of containerised applications within a cluster of nodes.

Kubernetes surged in popularity in 2017 and has shown no signs of losing momentum, to such point that it’s become the de facto standard tool for managing containers across a cluster.

A blend of exceptional engineering, Google’s willingness to let others take over and a passionate community (Kubernetes is No. 1 in terms of activity on GitHub and has a significant Slack and Stack Overflow community) is what makes Kubernetes such an impressive open source project.

Using the power of CSS and tagged template literals (recently added to Javascript), styled-components enables you to style your components with CSS code and removes the mapping between components and styles.

Styled-components grew in popularity like no other CSS-in-JS library back in 2017 and many boilerplates, grid systems, components and actual apps have already been built using it.

Some say that CSS is dead, but it could be argued that the emergence of styled-components and the CSS-in-JS model it revolves around have brought CSS back to life. ;) 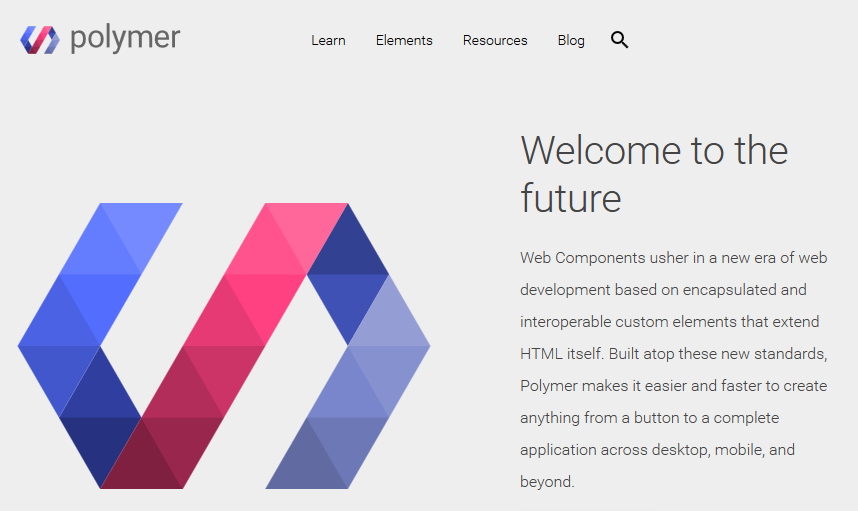 An open-source JavaScript library for creating web components which are then used to build web pages and apps, Polymer is currently being developed by Google developers and contributors on GitHub. Central to a wide range of Google services and websites, including YouTube, Google Earth and Google Sites, Polymer received an update in January (Polymer 2.4) which is paving the way for 3.0 and TypeScript support. 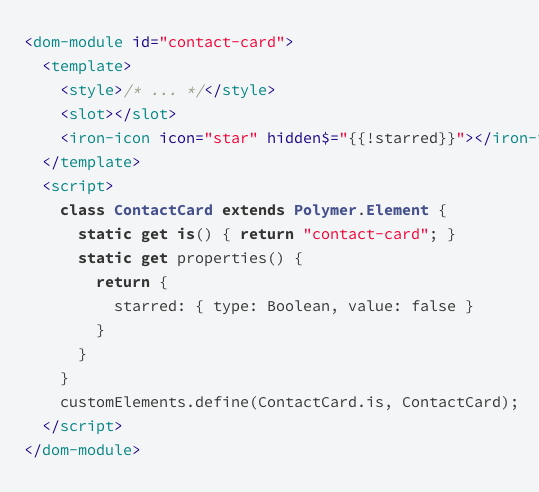 Being easy to use, learn, and teach, Polymer is becoming increasingly popular among programmers, who see the tool as a means to create fast, responsive websites, provide longevity to apps (Polymer is forward compatible with W3C standards) and simplify the overall development process.

Hyperledger differs from other inclusions in this list in the sense that it’s more of a hub for open industrial blockchain development than an individual project, with multiple frameworks and tools constituting it. While the umbrella project itself was started by the Linux Foundation, several leading tech companies including Intel and IBM have greatly contributed to its development and the creation of individual hyperledger frameworks. 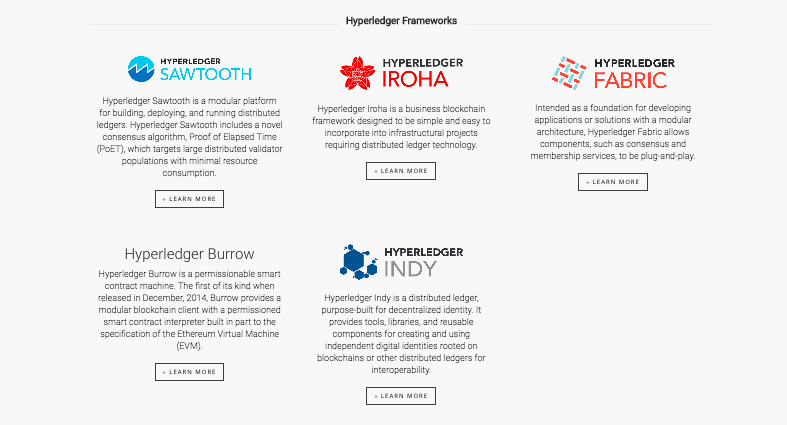 Hyperledger is therefore the host of various projects, of which Hyperledger Fabric is probably the most well-documented. Led by IBM, the project aims to be a plug-and-play solution to quickly build blockchain applications for enterprises and gives developers the tools required to build applications that enable the creation of a business network model, where participants can transact and exchange assets in real-time. 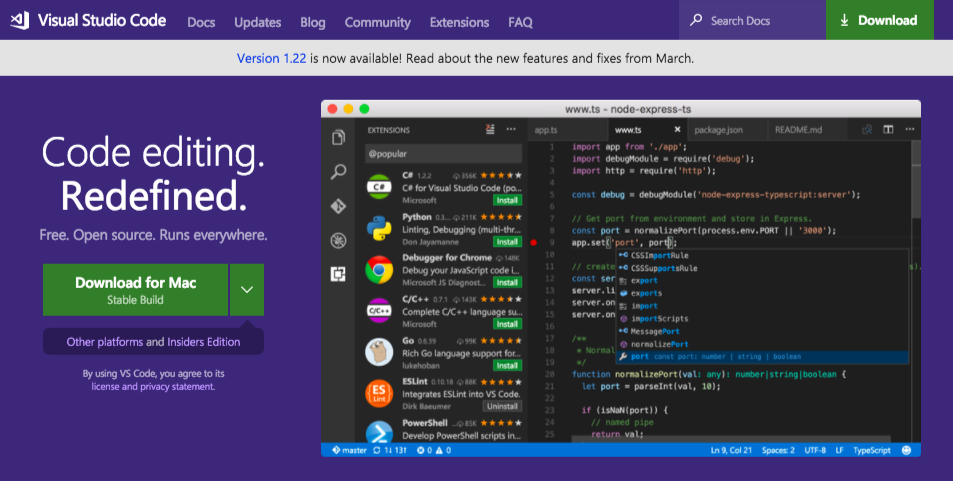 Ranked the most popular developer environment tool in the Stack Overflow 2018 Developer Survey, with 34.9% of respondents claiming to use it, Visual Studio Code is a programming-focused text editor that was first released by Microsoft in April 2015. 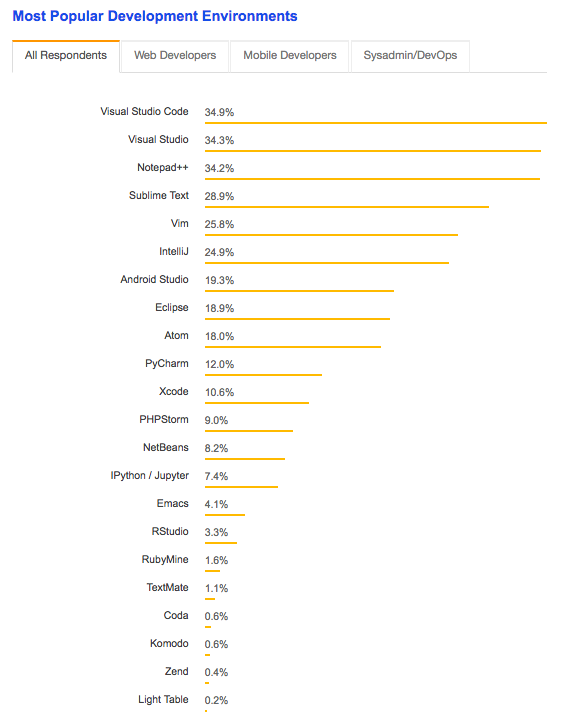 Despite being a relative newcomer to the market, VS Code has already picked up a lot of traction, mainly thanks to its speed, customizability and the impressive extension ecosystem that’s built in to it. Furthermore, VS Code’s in-editor debugger and Git integration functionalities are encouraging more and more developers to choose it over Sublime Text and Atom. 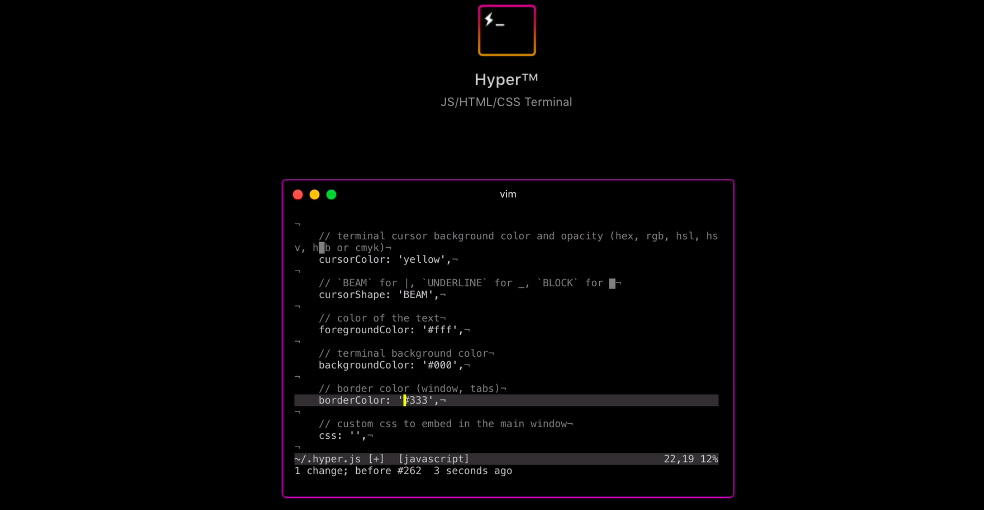 A cross-platform terminal emulator coded entirely with HTML, CSS, and Javascript powered by Electron, Hyper.is is extensible to the point that you can open web URLs inside it, change its look and feel and develop plugins for it. 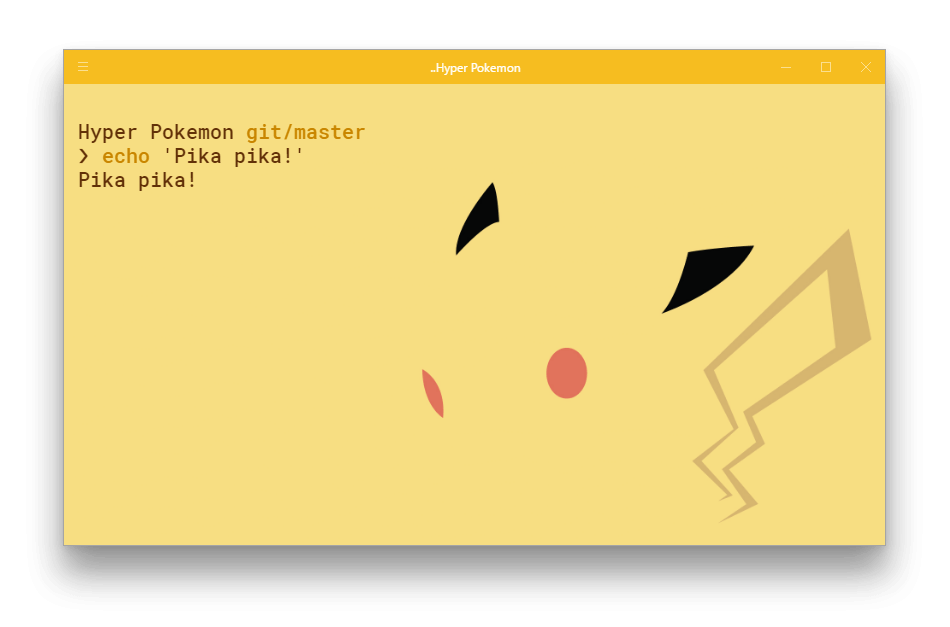 It’s racked up over 22,000 stars on GitHub and is persuading an increasing number of programmers to choose it over their default terminal thanks to nice features such as status lines and customizable themes.

While not technically what most people would call an open source project, Yangshun Tay’s extensive Tech Interview Handbook has been contributed to by over 40 GitHubbers and obtained more than 20,000 stars since its initial release in September 2017. As tech recruitment specialists ourselves, we absolutely love it!

Interview-related repositories are commonplace on Github, but unlike most others, Yangshun’s Tech Interview Handbook favours actual in-repo curated content over links to external resources. To add to that, the content within the repository covers more domain-specific and non-technical questions, as well as the usual algorithmic coding questions.

Looking for a tech job and eager to improve your interview skills? Check out Yangshun’s guide on how to prepare for coding interviews as well as this interview cheat sheet. 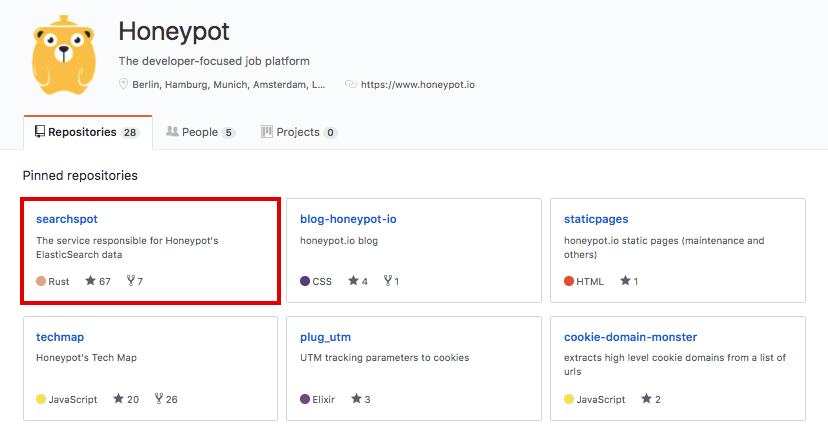 Our tech team members love to contribute to open source projects and share our internal products with the world through our Honeypot Github page. One of those is Searchspot, the search engine we use to let companies search for talents.

Written in Rust and mainly powered by rs-es and iron, Searchspot is a useful tool for anyone who needs a search engine with a more-or-less complex system of data filtering (including strings, dates, boolean queries g and full text search).

Interested in contributing to Searchspot or learning more about the project? Be sure to check out its repository on Github, as well as this introductory piece we made upon launching Searchspot back in 2016.

More than 2 decades after Eric S. Raymond published The Cathedral and the Bazaar, a reflective analysis of free software principles that led to the very first “Open Source Summit” in April 1998, open source technology is having an increasing impact on the development and implementation of cutting edge capabilities around the world.

This year has been a year of massive growth in open source and based on the projects we’ve included in our list, particularly TensorFlow, Hyper.is and Kubernetes, it’s quite clear that GitHub were right in predicting that deep learning, cross-platform development and containerisation would thrive in 2018.

Is there an exciting open source project you know of / are contributing to that you’d like to add to our list? Send us your suggestions or reply to our tweet below and we’ll update the article soon!