Why you should hire more female developers

Caring about the balance of women and men in your tech team makes sense not just from an equality perspective, but also from a business standpoint. With ever increasing numbers of women graduating from science, maths and technology subjects in Germany, the time is right to consider diversity as a business imperative rather than an simple box-ticking exercise.

The popularity of these subjects is growing among female third level students in Germany. In 2003, the percentage of women in Germany graduating from science, maths and technology subjects was below the European average (13.1%). In fact, Germany ranked 16th in Europe on this measure. By 2012, however, Germany had risen to having the 6th largest percentage of female graduates in Europe, after Cyprus (17.3%) Romania (17%), Portugal (15.9%), Italy (15.5%) and Turkey (15.2%). 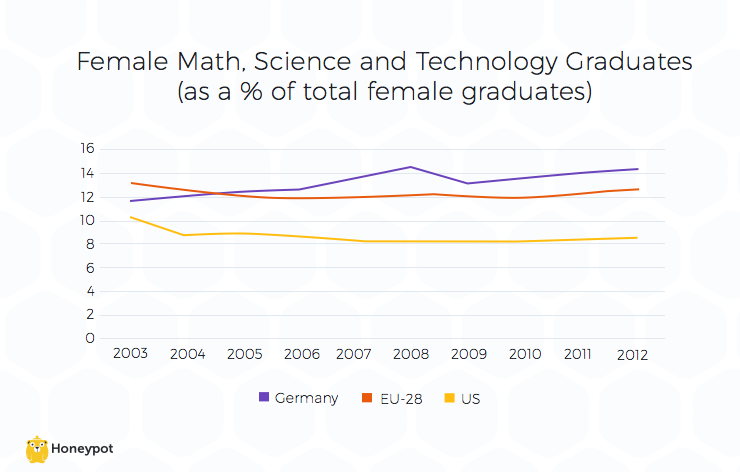 Despite improvements in the number of German women entering the fields of maths, science and technology, the number of female developers working in Germany is still very low. While it is hard to get exact figures, estimates put the percentage of female software developers in Germany between 3% to 8%. In Honeypot’s soon to be released research, we found no female CTOs among a sample of 58 of Berlin’s biggest startups.

The increasing number of female science, maths and technology graduates in Germany means now is a good time to begin to think about hiring more female tech talent in your company. But beyond arguments of equality or fairness, why care about increasing numbers of females in tech teams and tech leadership?

Because being around people who are different from us makes us more creative, more diligent and harder-working:

“The fact is that if you want to build teams or organizations capable of innovating, you need diversity. Diversity enhances creativity. It encourages the search for novel information and perspectives, leading to better decision making and problem solving. Diversity can improve the bottom line of companies and lead to unfettered discoveries and breakthrough innovations.” Scientific American, 2014

Because the return on equity of firms with women on their boards is also higher than those without:

“Enhanced female participation in management positions should not be seen as “nice-to-have” or a necessary box ticking exercise imposed to satisfy quotas…companies with more than one woman on the board have returned a compound 3.7% a year over those that have none since 2005…leading to higher returns on equity, higher price/book valuations and higher payout ratios.” Credit Suisse, 2014

Understanding some of the obstacles facing women looking at careers in tech can help companies to develop clearer talent pipelines and reap the benefits of a gender diverse workforce. Credit Suisse’s study divided obstacles in four categories, individual, cultural, workplace, structural/policy, which I borrow here and expand on to include tech-specific challenges:

While individual and structural obstacles can be difficult to overcome and certainly take a more concerted long term effort, changes in workplace and cultural contexts are easier to implement. Over the next month, Honeypot will be exploring issues facing women in tech. We will also be offering advice and tips for female developers working in Berlin and for companies looking to hire female developers in Berlin. We are actively encouraging more women to join Honeypot in order to take advantage of the opportunities for developers in the city.