Why are so many American software developers moving to Europe?

American developers are increasingly looking to Europe for new opportunities. Comparing data from January to September 2017 to the same period in the previous year, there has been a 50% increase in the number of developers from the United States signing up to Honeypot. What opportunities exist for American software developers in Europe?

According to Startup Genome, five out of the top 10 best cities for startups are in the U.S., but London, at #3, and Berlin, at #7, have been moving up the list: 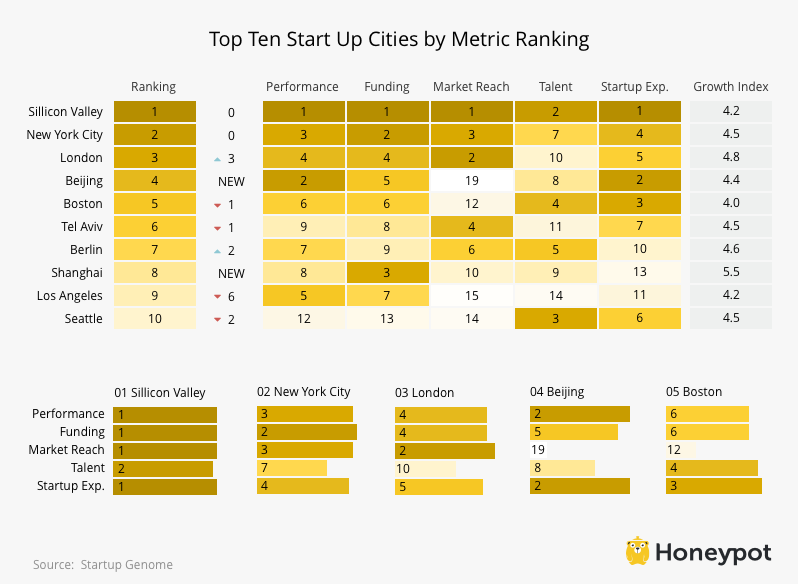 London moved up three places from its ranking last year, and Berlin advanced two places. Both cities offer great market reach along with reliable funding sources. With growing tech ecosystems, Europe is looking increasingly more attractive to American developers. European cities offer exciting new career opportunities and many startups and tech companies operate in English. Check out our startup map of Berlin and London to see where startups are concentrated within each city.

London is probably the best location in Europe for software developers in terms of choice and quality of the jobs offered. The metropolis isn’t just about startups - the inner city alone is home to an estimated 40,000 tech companies. A recent parliamentary report estimates that the shortage of digital skills costs the UK economy £63 billion per year. Needless to say, software developers in London are in high demand.

The size of the city means there are plenty of opportunities to keep up-to-date on tech trends, there are hundreds of meet-ups dedicated to almost every technology and at least 10 big conferences each year. London is a hub for talented people from around the world, meaning if you are motivated to learn, this could be the city for you. Developers considering London will get higher salaries than elsewhere, but also can expect a higher cost of living.

The city of canals has a ton to offer: Amsterdam itself is famous for great bars and nightlife while corporations such as Uber, Tesla, Elastic and Atlassian have major offices here.

Amsterdam also boasts a history of tech innovation. Home grown, well established software and security companies, such as Gemalto, Xebia, AVG Technologies, Schuberg Philis and TomTom are a testament to that culture of innovation. In 2015, the Netherlands ranked 4th on the Global Innovation Index. More recent editions to Amsterdam’s portfolio include Bright Computing, Pyramid Analytics and Wercker. Our Amsterdam Tech Map demonstrates more of the advantages Amsterdam has for international developers, such as the 2nd highest non-native English proficiency globally.

Once nicknamed the ‘poorest capital of Europe’ Berlin is now a European heaven for European startups - and it remains a cheap place to live. Software Developers are in huge demand in Berlin and while salaries won’t match what you would find in London or Amsterdam, but the cheaper cost of living means that the quality of life can actually be higher. Berlin is also beginning to rival London in terms of innovative conferences. Berlin is home to the first European editions of GraphQL- and Rust-focused conferences. Lastly, Berlin has natural beauty thanks to numerous parks and recreational areas.

Europe a Land of Opportunity For Developers

According to Dan Hynes, Europe is primed for tech professionals to find new positions in their industry. European companies hope to take advantage of the tech talent increase by adding new individuals with tech skills their teams may have been missing.

European countries offer incentives for technology specialists to come into the workforce. In the Netherlands, highly trained and skilled expats qualify for a tax reduction of 30% thanks to a Dutch tax ruling. The Blue Card is an easy way for non-EU nationals to live and work in Europe, with many European Union countries adopting the visa. Germany is leading the way issuing 85% of the total number of Blue Cards between 2012-2014.

A study by Statista.com even showed Europe with five of the top 10 fastest internet connections by country in 2017. In contrast, the U.S. was ranked number 10. 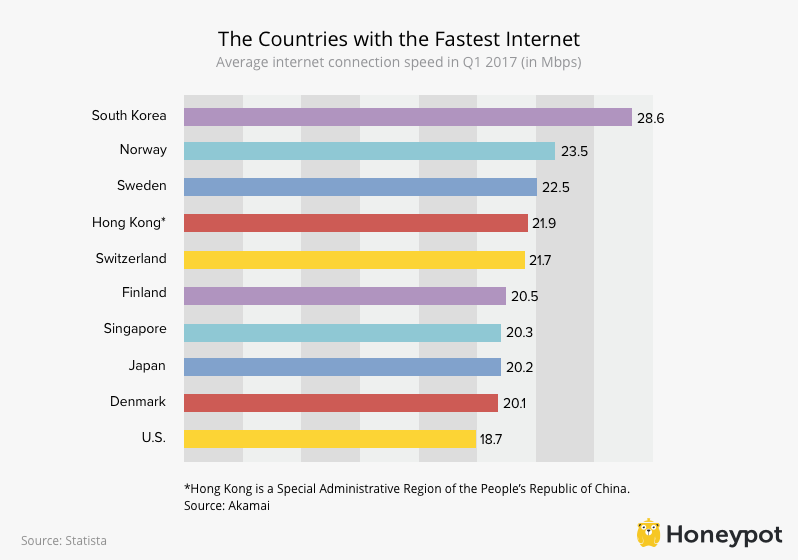 With so many great European cities to choose from, the only difficulty is trying to decide which one best suits you! Let us help you out, by signing up at Honeypot.io.

With mature markets in London and Amsterdam, both cities offer developers and tech talent alike the chance to advance their careers and work on projects they love. Berlin, however, may be the best city for those looking for a more untraditional approach to tech due to the number of startups to choose from. Whichever city they choose, the arrival of more American software developers, and the additional opportunities for collaboration and innovation, will be a very good thing for Europe’s standing in the tech industry.