Compass estimates that there are between 3,000 and 5,000 active tech startups in London, with a combined value of £34 billion, making London the fourth largest startup ecosystem in the world. For software developers working in the metropolis, London isn’t just about startups - the inner city alone is home to an estimated 40,000 tech companies. A recent parliamentary report estimates that the shortage of digital skills costs the UK economy £63 billion per year. Needless to say, software developers in London are in high demand.

Honeypot is a developer-focused job platform, headquartered in Berlin, Germany. To celebrate our expansion to London, we created an interactive tech map with over 800 tech companies and 12,000 job postings. The companies are sorted by industry and programming language to judge which developer skills are most in demand in London.

This blog post gives a summary of the findings from the research. For a full overview of our research, read our London Tech Map 2017 report.

London stands apart from other European cities for its unrivalled access to generous investors, affluent consumers and ambitious corporations. With its thriving tech ecosystem and strong financial support, the city can truly compete with Silicon Valley in drawing world-class entrepreneurs.

In fact, London has more tech “unicorns” – businesses valued at more than a $1 billion – than any other European city.

Analysis of VC investment by London & Partners shows that since 2010 UK technology companies have collectively raised almost £8 billion with London-based firms accounting for more than half of the total (£4.4 billion). Balderton Capital, in a similar study, puts investment even higher. According to its research approximately £7.5 billion has been invested in London between 2011 and Q3 2016.

According to Balderton Capital’s European Tech Landscape Report, the UK has the largest number of Science, Technology, Engineering and Mathematics (STEM) graduates as a percentage of the population in Europe.

London is home to over 300,000 developers, compared to 130,000 in Paris and some 80,000 in Berlin. According to StackOverflow’s London Edition of the 2016 Developer Ecosystem Report, there are more developers in Greater London than in San Francisco or New York. 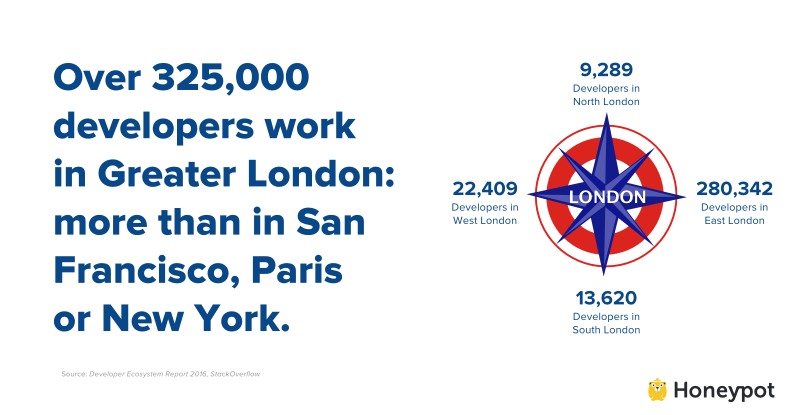 Despite London’s dominance in Europe, the House of Commons Science and Technology Committee revealed that 93% of tech companies in the UK feel the digital skills gap affects their commercial operations. The report also expresses concern over the increasingly acute shortages in areas such as cyber security, data analytics and both cloud and mobile computing.

Where are London’s tech companies located?

Through our research, we examined the most popular locations, by tube station and borough, for tech companies and the most commonly used programming languages in London.

Old Street has by far the highest concentration of tech companies in London. For those that know the city, this should come as little surprise. The Old Street Roundabout, which is located in East London, is also referred to as Silicon Roundabout due to the high density of startups located in the area.

The area is also home to TechCity, which began life as Silicon Roundabout, an organic initiative to support East London’s startups. Since 2011 it has been transformed. Former Facebook executive Joanna Shields, led the rebranding of Silicon Roundabout to TechCity. Today, the organization has a budget of £50 million and a mandate to make London as attractive as possible for tech companies. 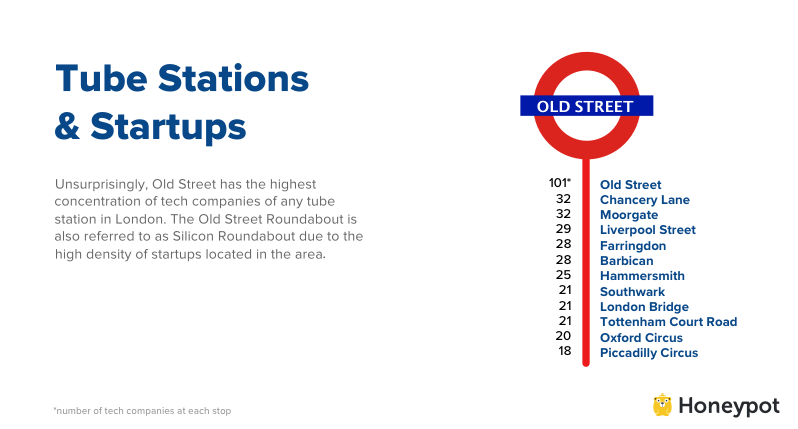 The Northern Line, which stops at Old Street Station, is the most densely populated line for tech companies in London. 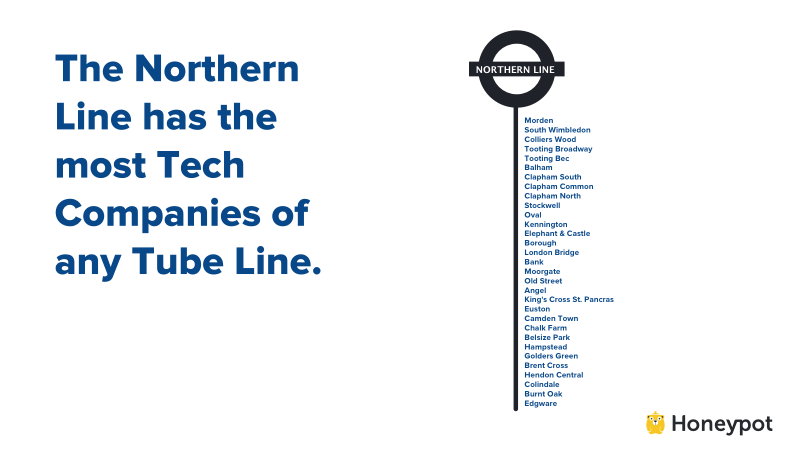 Tech companies headquartered in East London aren’t just paying for a hip location. They are also paying for proximity to developers. StackOverflow reported that over 80% of developers registered in London live in the east of the city.

Where are the majority of developer jobs in London located?

Startups located in the north-east borough of Hackney and the north-west borough of Camden, received the most VC investment in 2016, according to Beauhurst. But the more central boroughs of Islington and Westminster have the highest concentration of developer jobs. 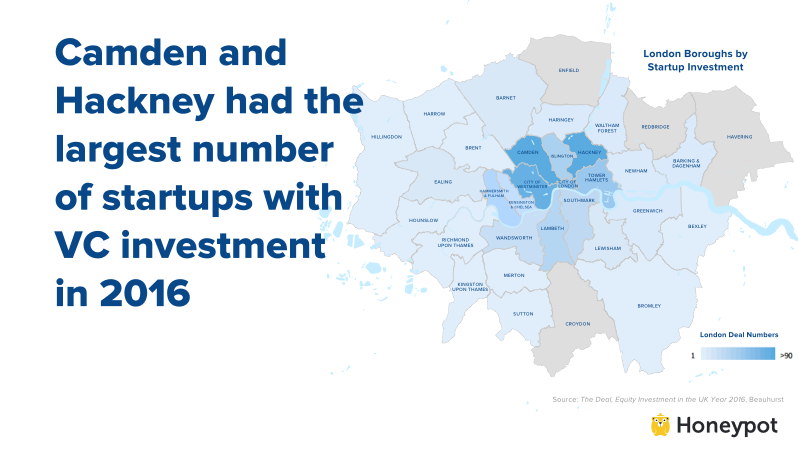 According to Balderton Capital, the average developer in the UK is paid roughly £55,000, making developers in the UK the fourth highest paid in Europe, following Switzerland, Norway and Denmark. 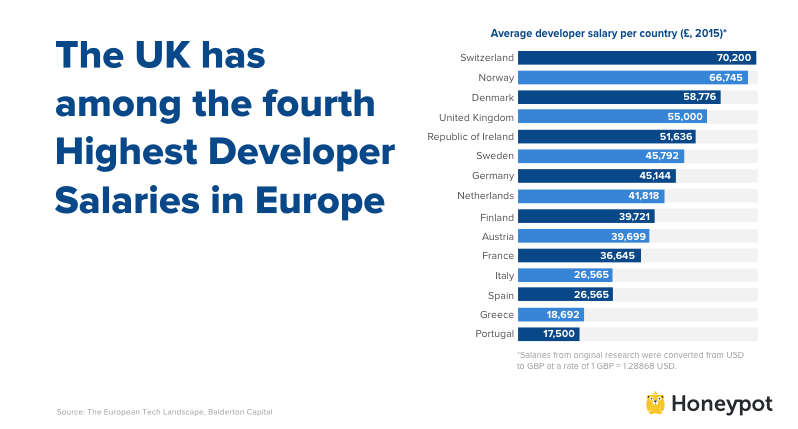 Living costs tend to be one of the biggest concerns for people in London.

The Programming Languages of London

Through our research, we looked at the most popular backend and frontend programming languages in London and their distribution across the city.

Java is London’s most popular programming language. Over one third of tech companies in London use the language as part of their tech stack. Companies using Honeypot to hire developers tell us they favour Java for its stable and mature ecosystem, which is replete with well-tested frameworks and libraries. Java is particularly popular among FinTech and AdTech companies. 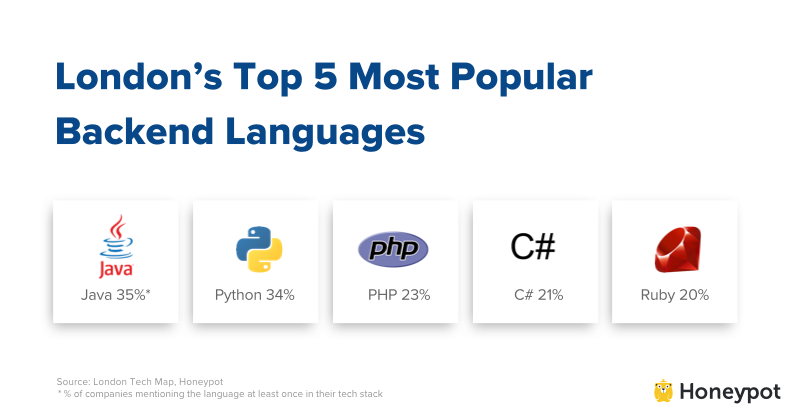 Python and PHP are the second and third most widely used languages by tech companies in London, followed by C# and Ruby. Java, in particular, is dominant around the central boroughs of the City of London and the City of Westminster, where many FinTech companies are located. 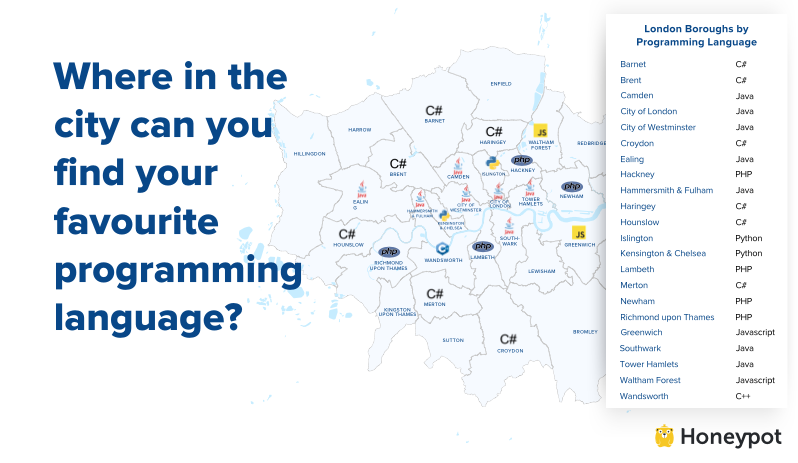 Over 60% of companies in London mention AngularJS in their techstack. AngularJS is designed and maintained by Google. React.js, the second most common frontend framework, is maintained by Facebook, Instagram and a community of individual developers. Though React is currently only used by 32% of tech companies in London, it’s still a very new framework and many predict it will continue to grow in popularity over the coming years. 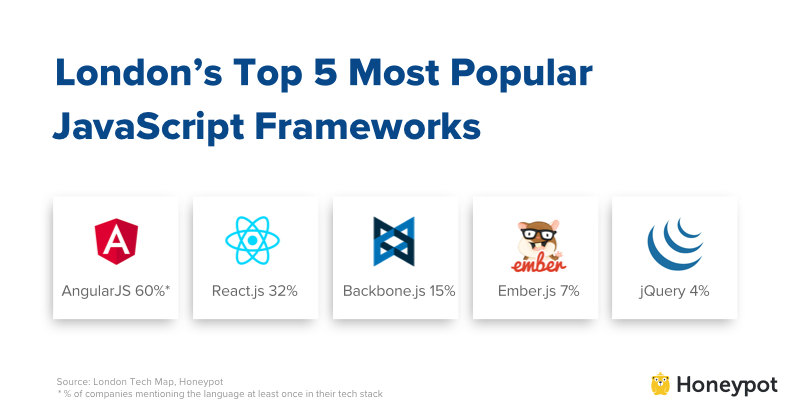 The Products of London

While programming language and salary are motivational factors for many developers when choosing their new job, others are drawn to the products companies are building. We divided our sample companies by industry to show the breadth of products on offer for developers in London. 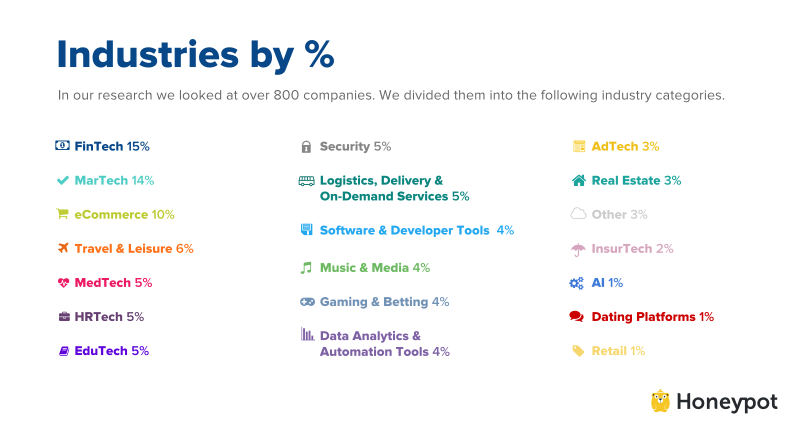 FinTech is the most common segment amongst London’s tech companies (15%). London’s largest industry is finance and the city is the largest financial exporter in the world, making it a prime location to establish a FinTech startup. FinTech refers to companies who use technology to offer existing financial services at lower costs or to offer new tech-driven solutions.

The UK is the fastest growing region for FinTech investment in the world. UK FinTech firms raised £4.1 billion of venture capital between 2010 and 2015, compared to £3.4 billion raised across the rest of Europe combined. 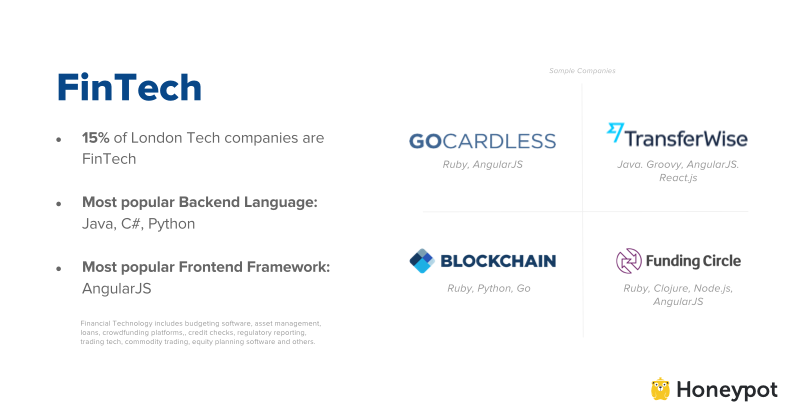 The FinTech industry in London benefits from strong government advocacy. Recent initiatives include a “regulatory sandbox” implemented by the Financial Conduct Authority (FCA), which allows businesses to test new financial products without having to comply to normal regulation.

FinTech startups are popular with consumers because they offer cheaper and faster online services. Household names in the city include Y Combinator-alumni GoCardless and money transfer service TransferWise. A whole host of companies are offering new solutions for lending. LendInvest enables peer-to-peer mortgage lending, Iwoca offers small business loans, and RateSetter and Zopa allow people to lend to others from their savings.

Other companies are challenging more traditional financial services providers, such as DueDil, a financial information provider akin to Bloomberg, and eToro which allows you to automatically copy trades of top traders. For developers looking for a challenging tech product, perhaps one of the most interesting companies located in London is Blockchain, the world’s most popular bitcoin wallet and bitcoin software provider. Their recent article on blockchain technology covers everything from how it works to things that can go wrong. 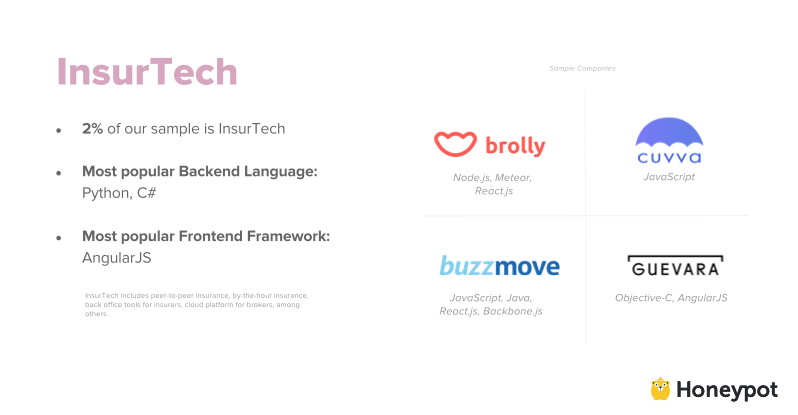 InsurTech, which is sometimes classified within FinTech, is one of London’s fastest growing industries. The insurance industry has been slightly slower to react to digital disruption than other industries, but over the last year it has picked up pace significantly. Venture Capital investment in insurance technology companies doubled in 2016 to almost £1 billion.

For more insight into London’s industries and products, check out our research report.

The Future of London’s Tech Scene

It is widely accepted that Silicon Valley’s tech dominance comes from its ability to attract the best talent from around the world - 70% of software developers working in Silicon Valley in 2013 were born outside of the US. Currently, 53% of employees in startups in London are foreign-born. With uncertainty surrounding the right to work in the UK due to Brexit, many European developers are hesitant to count London as a destination of interest.

However, London’s community of entrepreneurs have been unwavering allies in ensuring UK companies have access to a diverse workforce. In 2015, a number of companies joined together and sent a a letter to David Cameron to urge him not to cut immigration to the country. The Tech Nation Visa scheme and Exceptional Talent Scheme allow companies to hire skilled non-UK born technical talent. Currently, the Home Office allocates just 200 and 1000 spots respectively to each program. In a post-Brexit world, tech companies will continue to lobby government for more access to international talent. These schemes will likely be extended and other special conditions established for skilled European technical workers, as the UK seeks to protect one of its most valuable industries.

London is one of the most attractive locations in the world to build a successful career. Developers interested in the city will find a diverse selection of open positions with a huge variety of products. Outside Silicon Valley, London is the most likely place to birth the next unicorn.

For more insight into London’s programming languages, industries, and products, check out our research report.

To get an interactive overview, head over to our Tech Map

Over 1,000 candidates sign up weekly and over 1,500 companies hiring with us.