Zahra’s Story: How one developer relocated from Iran to Austria

On her 31st birthday, Zahra was ready for a change.

It was September 2020, and Zahra, a software developer, had lived in Iran her whole life. Based in Tehran with her husband, Zahra was working from home and reconsidering what she wanted. Her newly restricted pandemic life meant that had a lot of time at home to think about her situation, her lifestyle, her hopes and dreams, and she began to consider the idea of moving to a new country.

On her 31st birthday, Zahra was ready for a change.

It was September 2020, and Zahra, a software developer, had lived in Iran her whole life. Based in Tehran with her husband, Zahra was working from home and reconsidering what she wanted. Her newly restricted pandemic life meant that had a lot of time at home to think about her situation, her lifestyle, her hopes and dreams, and she began to consider the idea of moving to a new country.

“In recent years, the quality of life had decreased in Iran - economic, social and cultural rights were eroded and I wasn’t happy there anymore,” said Zahra. “I’d always thought about immigrating, where I could improve my job prospects and work in an international company, but was scared that I wasn’t ready. My self-confidence wasn’t there yet.”

But that birthday, she decided she was ready for that challenge. She decided to take the plunge and start looking for job opportunities in Europe. She watched YouTube videos where other Iranian people explained how they had successfully applied for overseas jobs from Iran. In one video, the developer suggested using Honeypot, a job platform specifically for developers and tech professionals. Zahra created her account the next day.

“I got lots of support from Honeypot, and lots of companies started to send me interview invitations,” Zahra said. “Overall, my experience applying as a candidate from Iran was good.”

Some companies were happy to help Zahra with her upcoming immigration process (including the one that hired her!). “But I did also have the experience where, if a company had a European applicant who had the same skills as me, they would prefer to offer the job to them. It’s quite tough.”

Less than one week after she created her Honeypot profile in January 2021, she interviewed with Blackshark, a company working on creating 3D models of the earth.

“All the interviewers were very friendly and supportive,” Zahra praised. “I was so excited by Blackshark’s friendly atmosphere, its flat hierarchy, the trust between colleagues and also the awesome work they were doing.”

Two weeks after the interview, Blackshark offered her a role as Python Engineer. Of course, for anyone who has ever immigrated to a new country, you know that’s only half the battle.

Applying for a visa involves a lot of admin. You have to gather documents that attest to lots of different aspects of your life: your education, your work history, your financial situation, your family and more. Often you have to make appointments to obtain or certify those documents. And alongside all of that, you might still be working full time!

Luckily, Zahra was introduced to Manuel, one of Honeypot’s country managers. He helps provide visa relocation support for companies hiring overseas talent on the platform. Manuel helped both Zahra and her new employer understand the required documents and provided templates to help them get started.

Less than a month after Zahra signed her contract, she was able to send off her visa application.

“Honeypot helped me so much through my visa process. They took care of everything,” she said.

…And did we mention that she sent her application in March 2021? Shortly after the application was in, COVID-19 hit. The lockdowns began, including in Austria, and Zahra was eager to escape the work from home lifestyle. Visa applications like Zahra’s can often take a couple of months and with the pandemic, there was no reason to believe the process would be quick.

While we’ll never know what prompted the Austria authorities to move so quickly, Manuel suggests that Zahra’s speed and commitment to the process must have made an impact. He says it was, by far, the fastest Red White Red Card process he has witnessed to date.

In early May, as the pandemic was in full swing, Zahra and her husband finally arrived in Austria.

Of course, moving to a new country isn’t all tasty new foods and cool sights. There are going to be some hurdles.

“I was concerned about the language barrier–worried I wouldn’t be able to integrate into society easily, and also that I wouldn’t find a community,” Zahra said. “But at the same time, I was so excited to see Europe. And I knew that I would have more freedom as a woman. In Iran, I had to wear a hijab, but here it’s not compulsory. Here in Austria, I can ride a bicycle, dance in the street, and wear whatever I like!”

Once she became settled in Graz and her new job, many of Zahra’s fears drifted away. The city, her teammates and new projects all keep her going.

“Every day I wake up with so much motivation! I know I’m starting my day with the most friendly and supportive people at Blackshark, and every day I have something new to solve that makes me feel alive.”

In the end, Zahra says that she feels free and happy in Austria. Though she misses her family and being able to hear and use her mother tongue, she’s finding life in Europe is exactly what she needed. 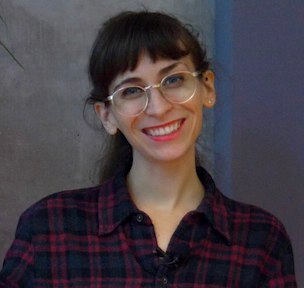 Hannah is a writer, tea aficionado and geek based in Berlin.