We talk to hundreds of developers each week. Over the course of 2016, we have gathered lots of interesting information about salaries, job expectations and technical preferences. We bundled it all together into this handy blog post so that your developer hiring in 2017 is smoother than ever.

Our data is taken from January to November 2016 and looks at the average values of salary offers made over Honeypot. The data doesn’t look per technology, which can also show some variations, but it can give you an idea of how competitive your company is relative to others. 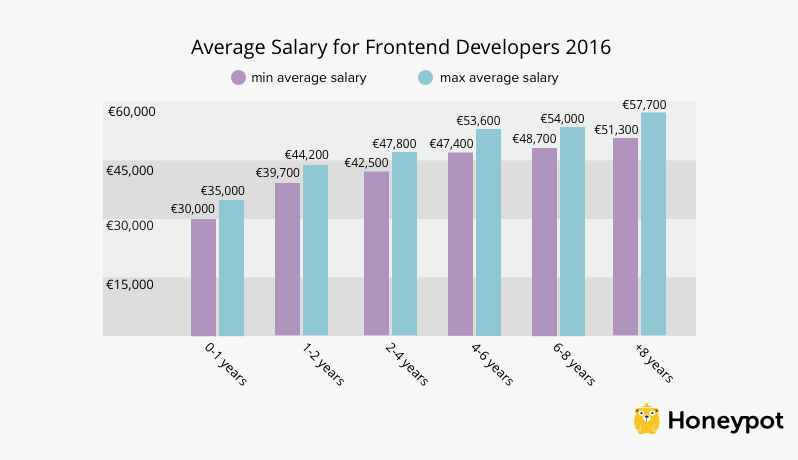 The average salary of a backend developer in Europe is €54,000 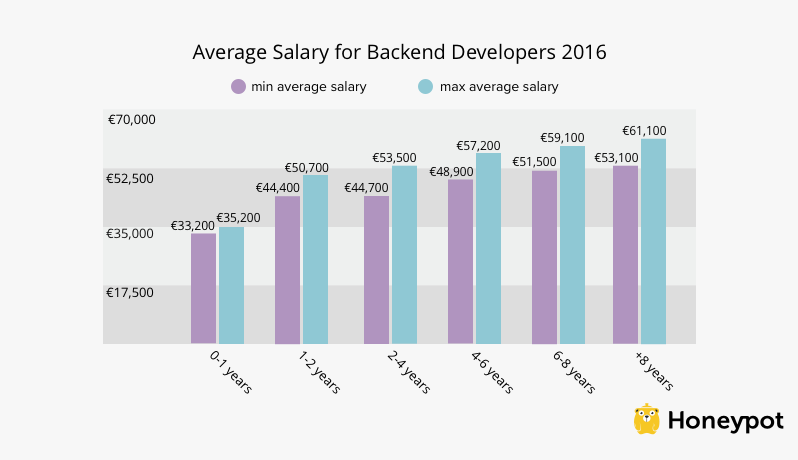 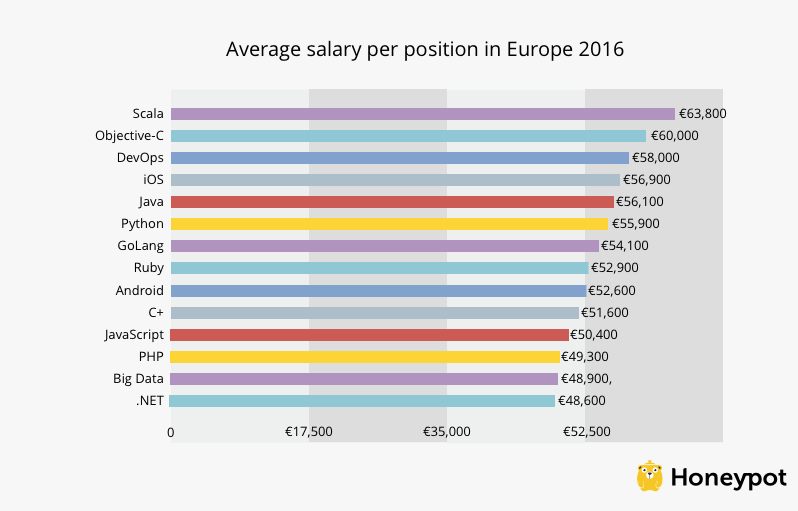 JavaScript is the most in-demand programming language

Javascript is the most in demand programming language and Angular is roughly three times more popular than React. This is measured by invites sent.

Team is more motivating than salary for most developers

In our developer survey, we found that salary is only the fourth most important factor for developers in the workplace. 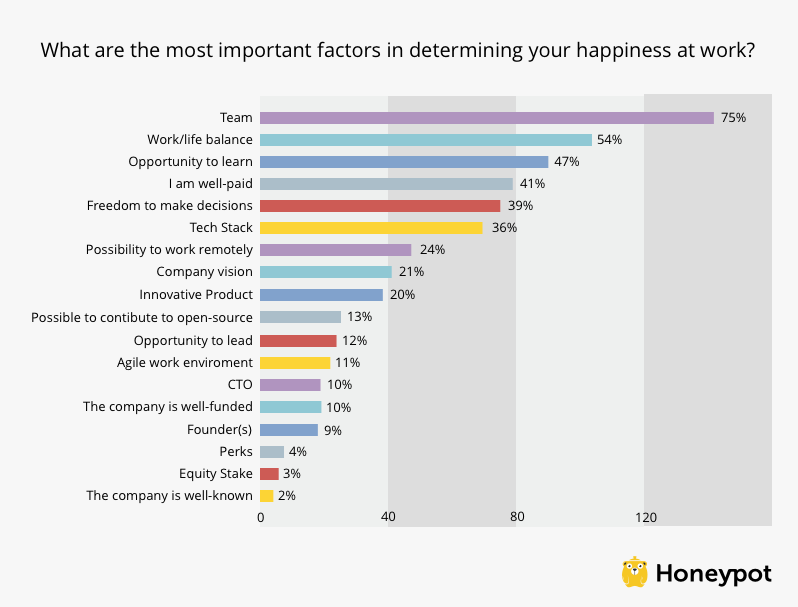 A CTO with human skills is more respected than a CTO with computer skills, but having both is the best.

Developers are more motivated by a skilled leader than a skilled programmer. But having a bit of both is really what captures the attention. 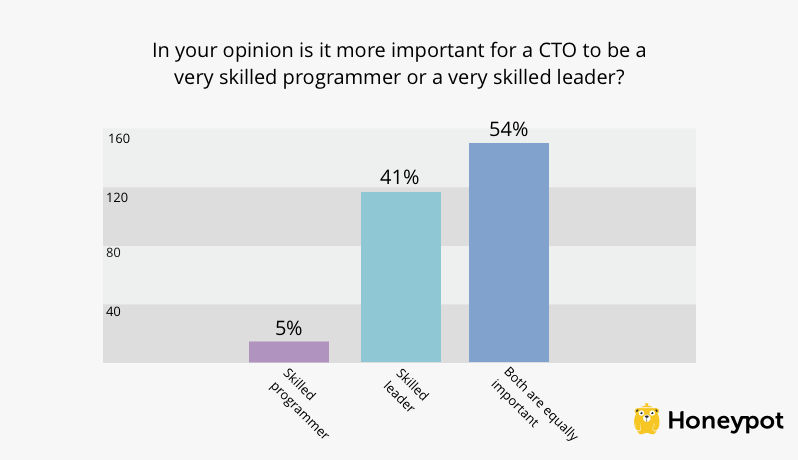 Javascript is the most popular language for developers to work with 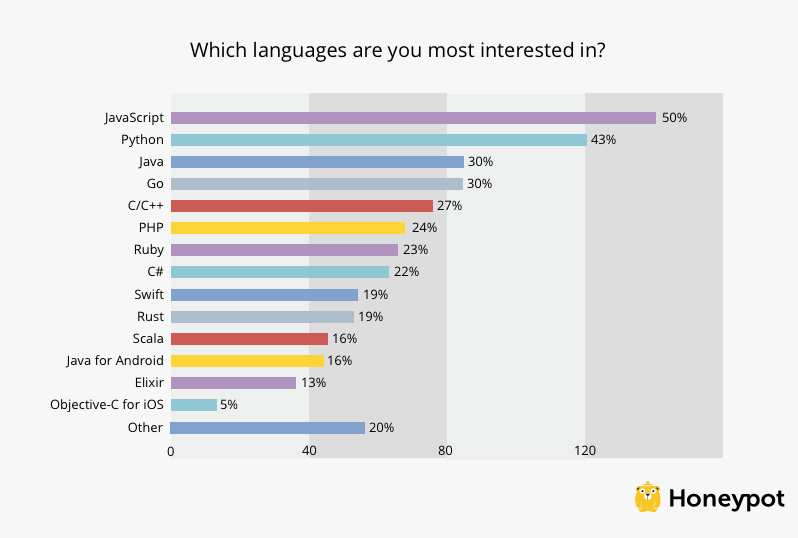 We have received 100s of feedbacks from developers about the interviewing process of companies. While there are a lot of positives, the most common negative is the time it takes from first contact to interview and from interview to hire. Here are some sample feedbacks we have gotten from developers:

“After having the interview with the CTO it would be great if they could take the decision on offering or not a little bit faster.” “They can improve on the pace of their hiring process where if they send any test, they should respond the results quickly on the submission or solution.”

Another common reason for developers annoyance is the dissatisfaction with the process in general. We frequently get the feedback that developers simply would like to know the steps from the start.

“After going through a take-home test and a live coding session, and being commended for my performance on both, I was turned down because (in my interviewer’s words) “I come from too different of a background to be an environment fit.” It seems inefficient to have candidates go through two intensive technical evaluations, only to drop them for a reason (background) that could easily be assessed before. I think clearing such requirements at the beginning of the selection process would be a better approach.”

“It could have been a bit more structured. It could have started with saying that first we are going to do this, then talk about this etc.”

There were thousands of connections made on the Honeypot platform in 2016. To make a connection, a Honeypot user (a CTO, HR person or founder) sends an interview invite to a developer.

We aggregated all the text from the interview invites on Honeypot and looked for the most commonly-occurring terms. The three most popular words used were microservices, agile and leading!

Job platforms, like Honeypot, are the most common place for developers to look for a job!