Honeypot is launching in Vienna!

Vienna’s high quality of life mixed with the increasing demand for technical candidates makes it the perfect city for developers. Regularly topping polls of the most livable cities in the world, Vienna is home to over 80,000 software developers–roughly 80% of all developers in Austria. Despite this, more than a third of companies still complain about the difficulty of filling vacancies.

Against this backdrop Honeypot, Europe’s largest developer-focused job platform, is opening a new office in the Austrian capital today. Hundreds of Austrian developers have already signed up with Honeypot to work in cities such as Berlin, Amsterdam, Munich, and Hamburg. From today, Austrian and international developers can also make themselves visible to Austrian companies hiring in Vienna.

To celebrate Honeypot’s launch in Vienna, we decided to take a deep dive into life as a developer in the Austrian capital.

Vienna’s startup scene burst into life over the last seven years. High profile exits, such as Runtastic, the fitness app acquired by Adidas in 2015 for $240 million, and MySugr, a diabetes app acquired by Roche for €74 million, have spurred confidence in the region.

Vienna’s central location in Europe, great quality of life and robust startup infrastructure have earned it a place at the top of this year’s Startup Cities Index. VC still plays a relatively small role in the startup scene in Vienna in comparison to other cities. Currently the three most important financing sources are the founder’s own savings, public subsidies and allowances, and business angels.

Governmental initiatives such as the Vienna Startup Package, a two-month all expenses paid trip to the city for international startups, have led to startups popping up all over town. Our favourite? Robo Wunderkind, a company that’s created a kit of interchangeable building blocks that can be built into programmable robots in an effort to get kids interested in engineering and coding. 😍

And it’s not just local companies who see the appeal of setting up in Vienna. In April of this year, N26, a leading mobile bank, announced the launch of a new tech hub in Vienna with the creation of 300 jobs for software developers.

Working as a Developer in Vienna

Despite exciting career prospects and high income opportunities, there has been a significant shortage of skilled workers over the last five years. According to Honeypot research, in 2019 there were roughly 8,000 unfilled tech positions in Vienna and 10,000 in Austria more broadly. Likewise, in 2019 over 30% of Viennese companies reported difficulties filling software engineering roles. According to EU research, the shortfall is due to insufficient skills supply, increasing demand for tech workers in other professions (such as medicine), and the increasing need for data skills–particularly in large enterprises. 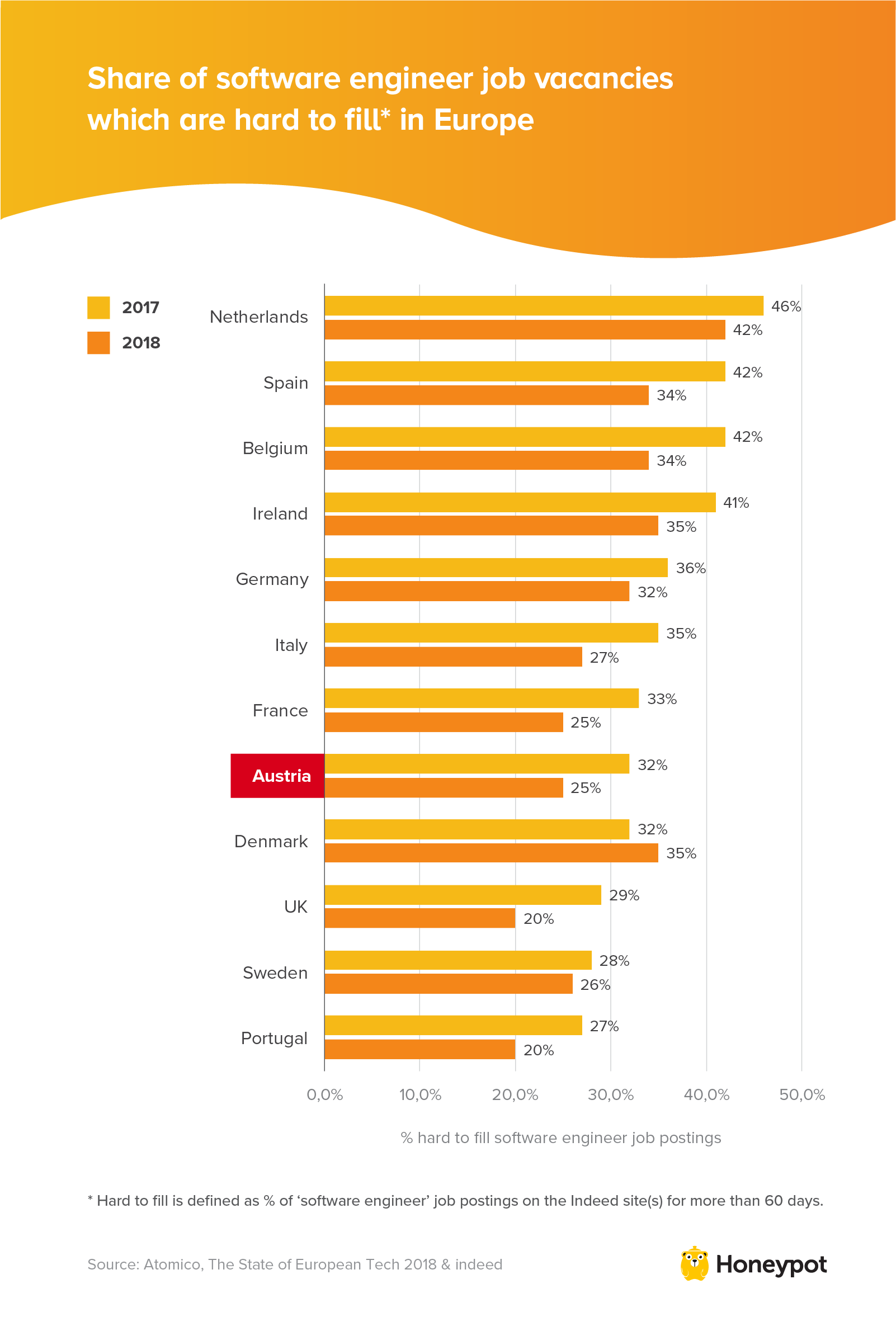 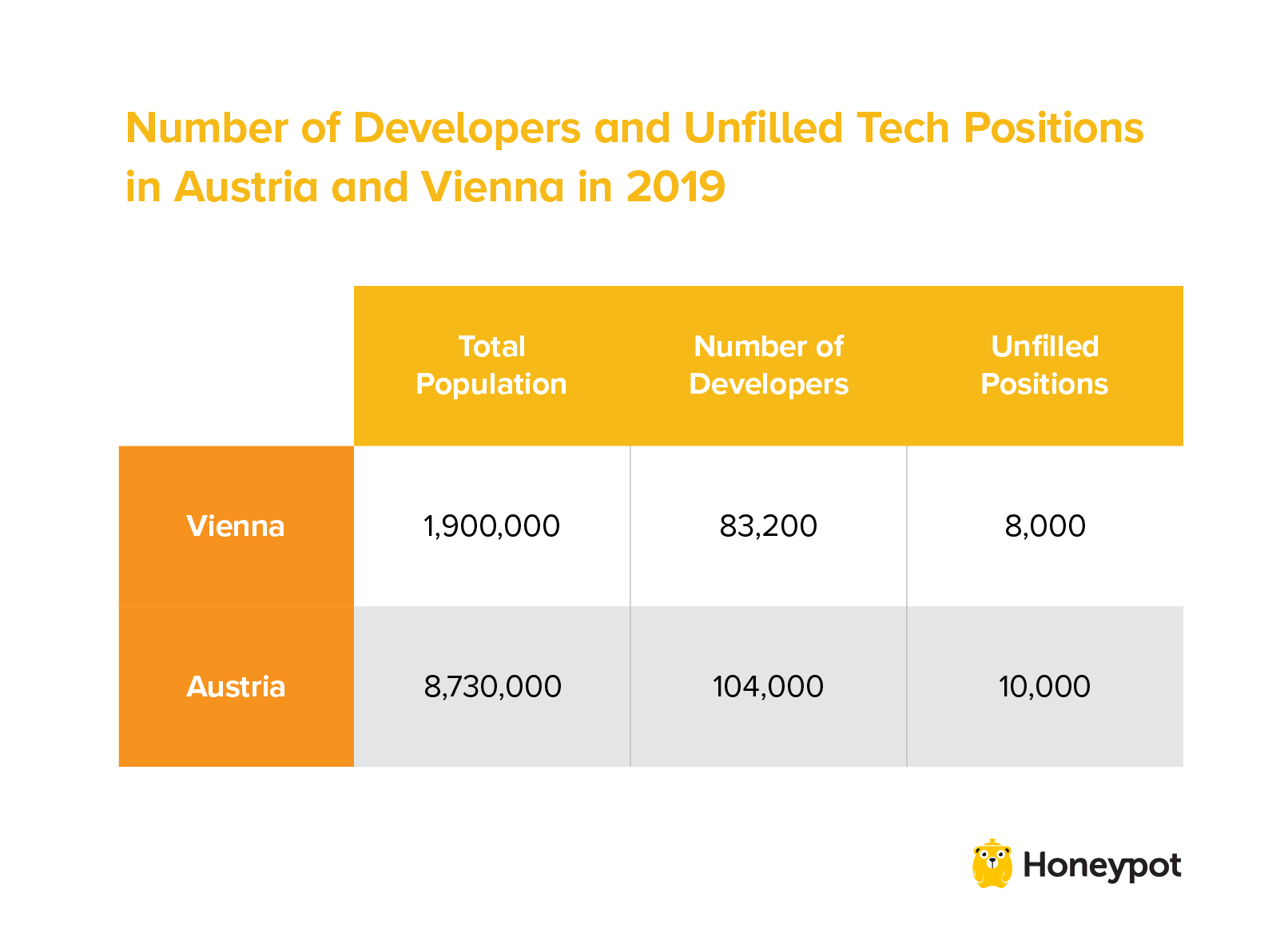 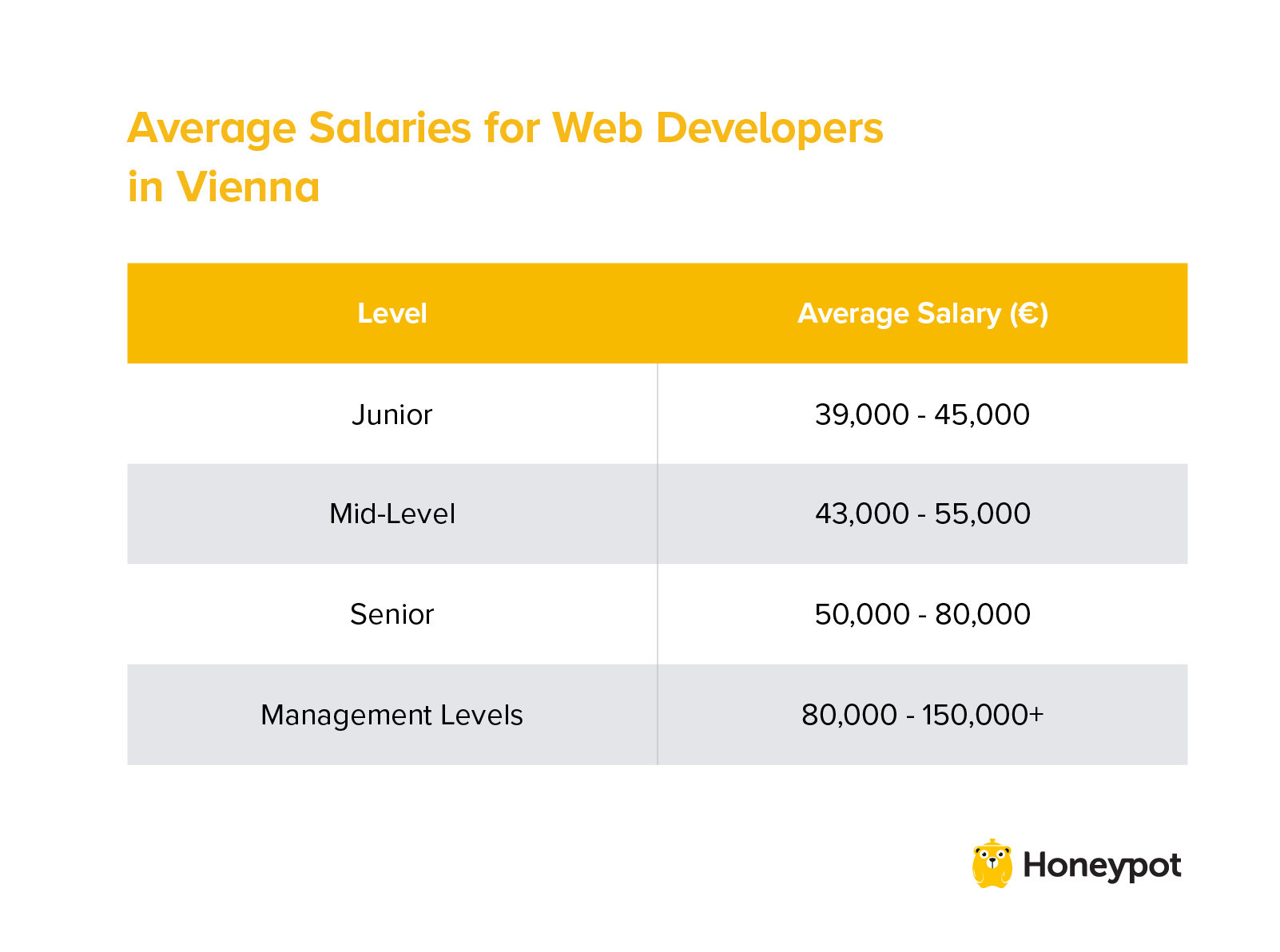 To understand what the average developer in Vienna looks like, we took the raw data from Stackoverflow’s 2019 Developer Survey and isolated Austrian respondents. 839 Austrian developers replied to the survey, and 30% of them had between five and nine years of experience. While the sample represents less than 0.01% of Austria’s total developers, it is the most complete dataset currently available and reveals interesting insights into their experience and preferences. 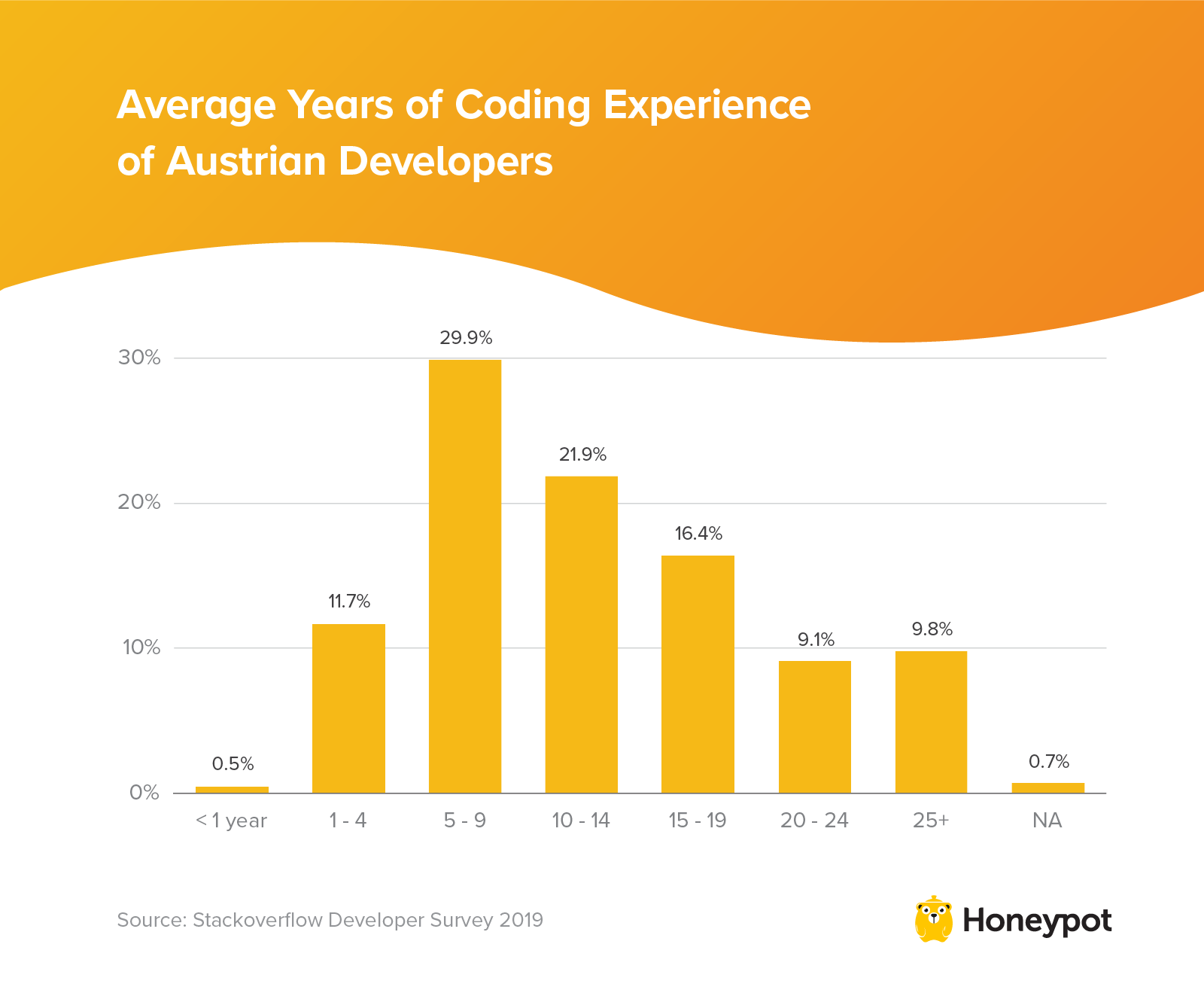 How happy are Austrian developers? 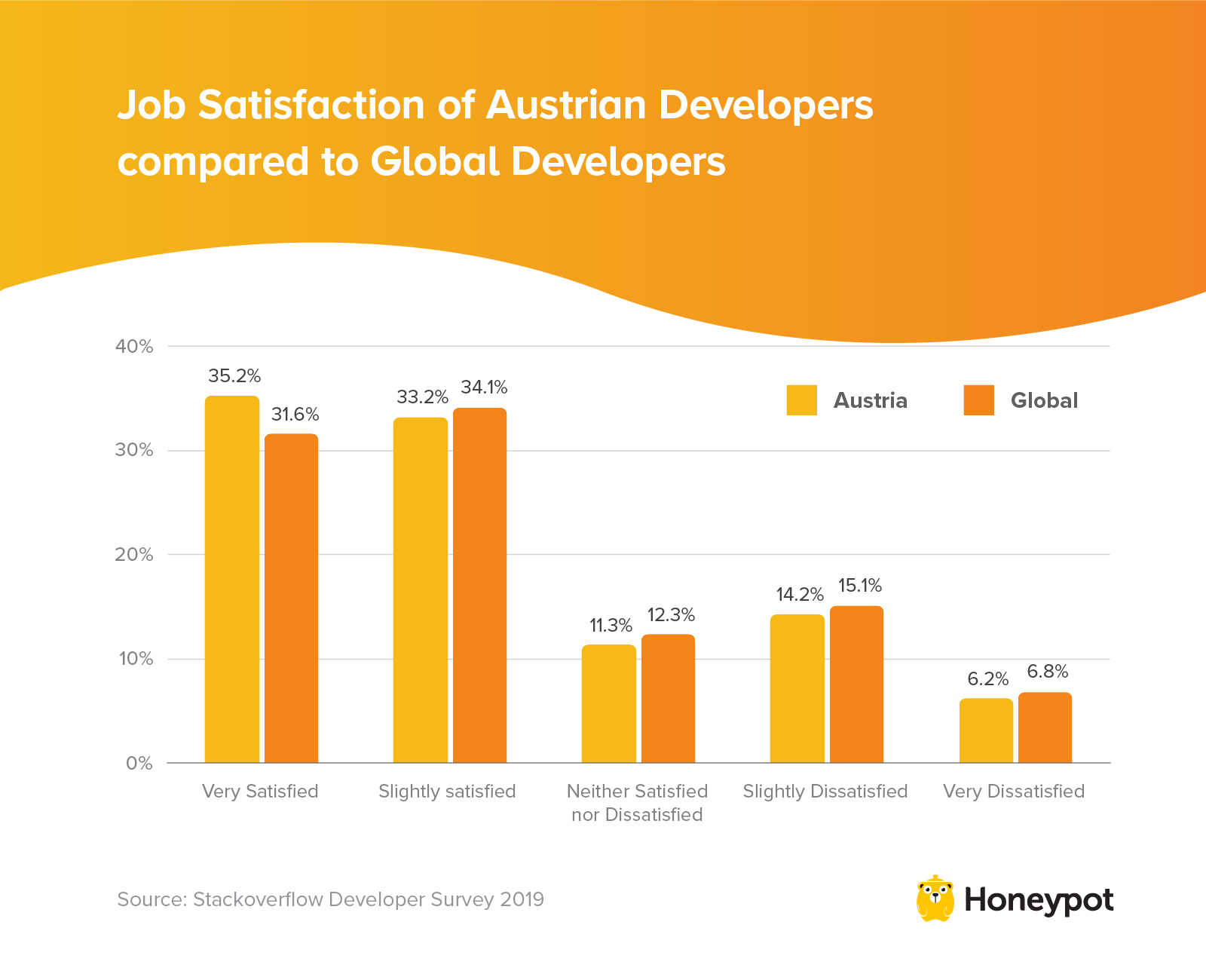 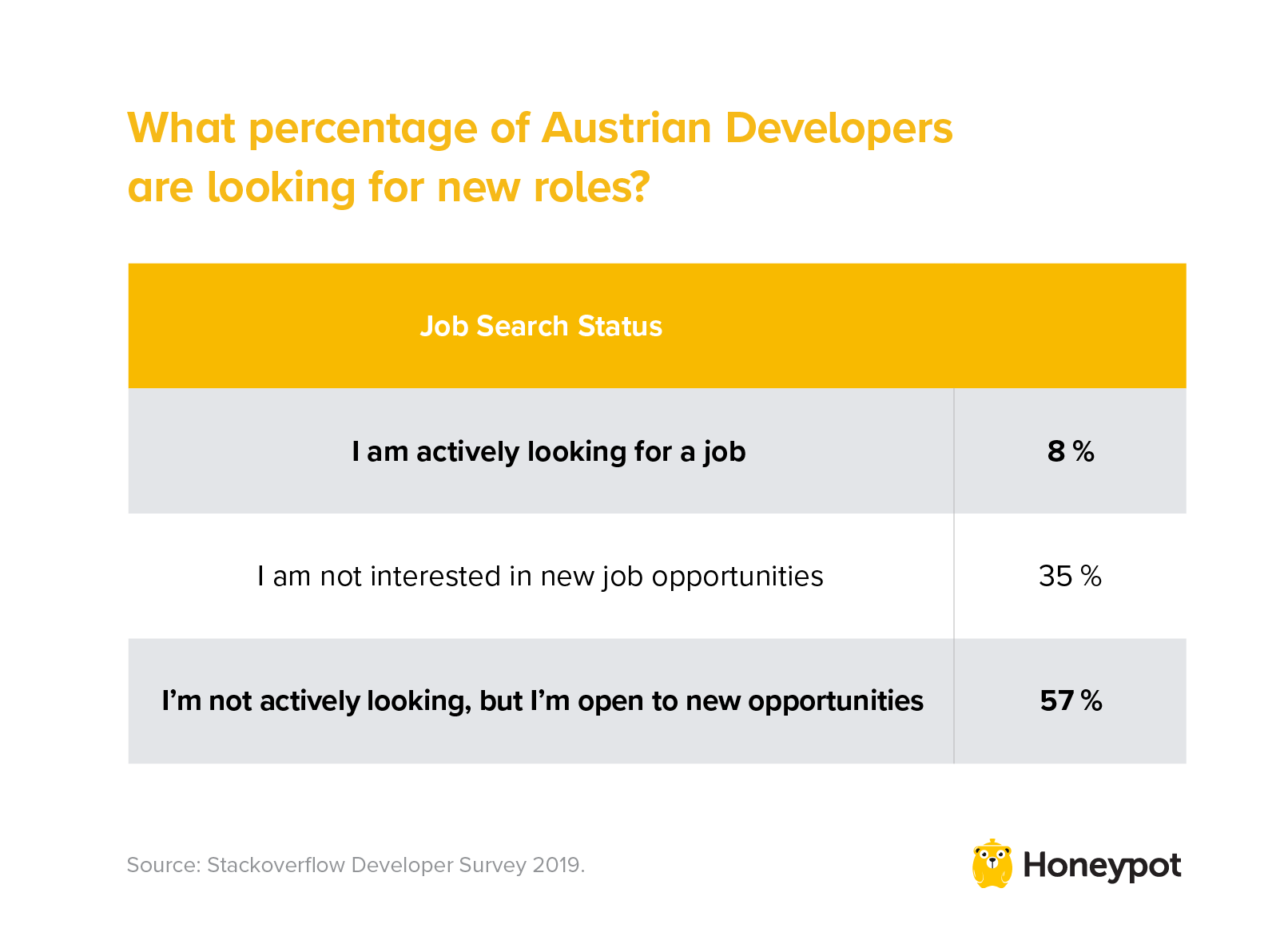 In the survey, respondents were asked to picture themselves comparing two jobs with the same compensation, benefits, and location, and to consider which characteristics would most influence their choice between the two. For Austrian developers, flex time or flexible schedules came out on top, with 54% of respondents selecting it as a least one of the most important factors. This was followed by office environment or company culture, and in third place by technologies and opportunities for development. At the bottom of the list was the diversity of the company or organization with just 4% of respondents considering it an important factor.

Austrian developers agreed that the biggest obstacle to their productivity is a distracting work environment, followed by being tasked with non-development work, and thirdly by a schedule packed with meetings. 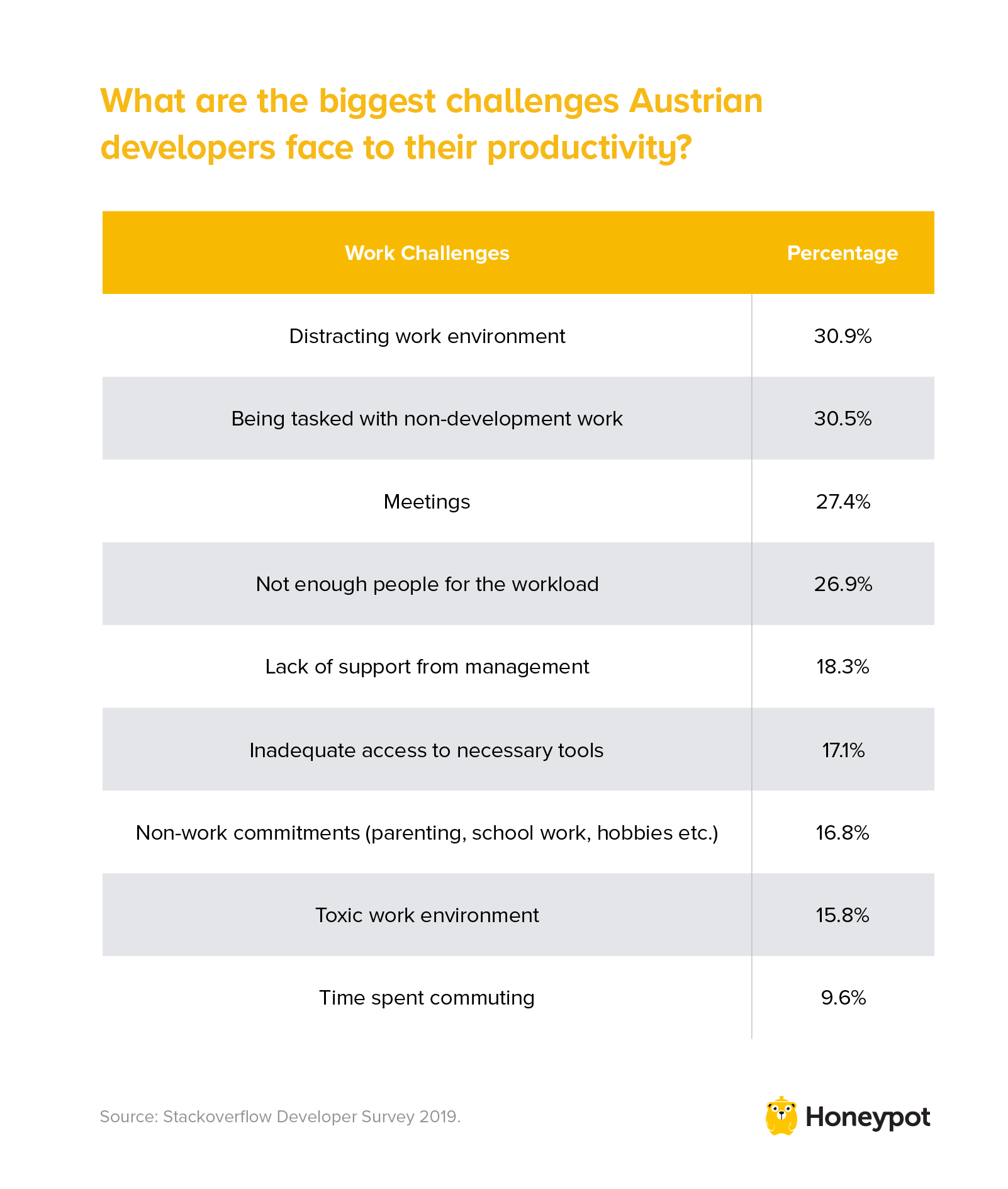 Life for Developers in Vienna

Vienna is an undeniably attractive place to live. In 2018 and 2019, the Austrian capital topped The Global Liveability Index, an annual report by The Economist Intelligence Unit. Likewise, the city has earned the top place on the Mercer Quality of Living City Ranking for ten consecutive years.

These reports look at various qualitative and quantitative factors across categories such as stability, crime, healthcare, personal freedom, housing, recreation, culture, environment, education, public transport, and infrastructure. Out of a possible 100 points on the Economist’s report, Vienna scored 99.1. 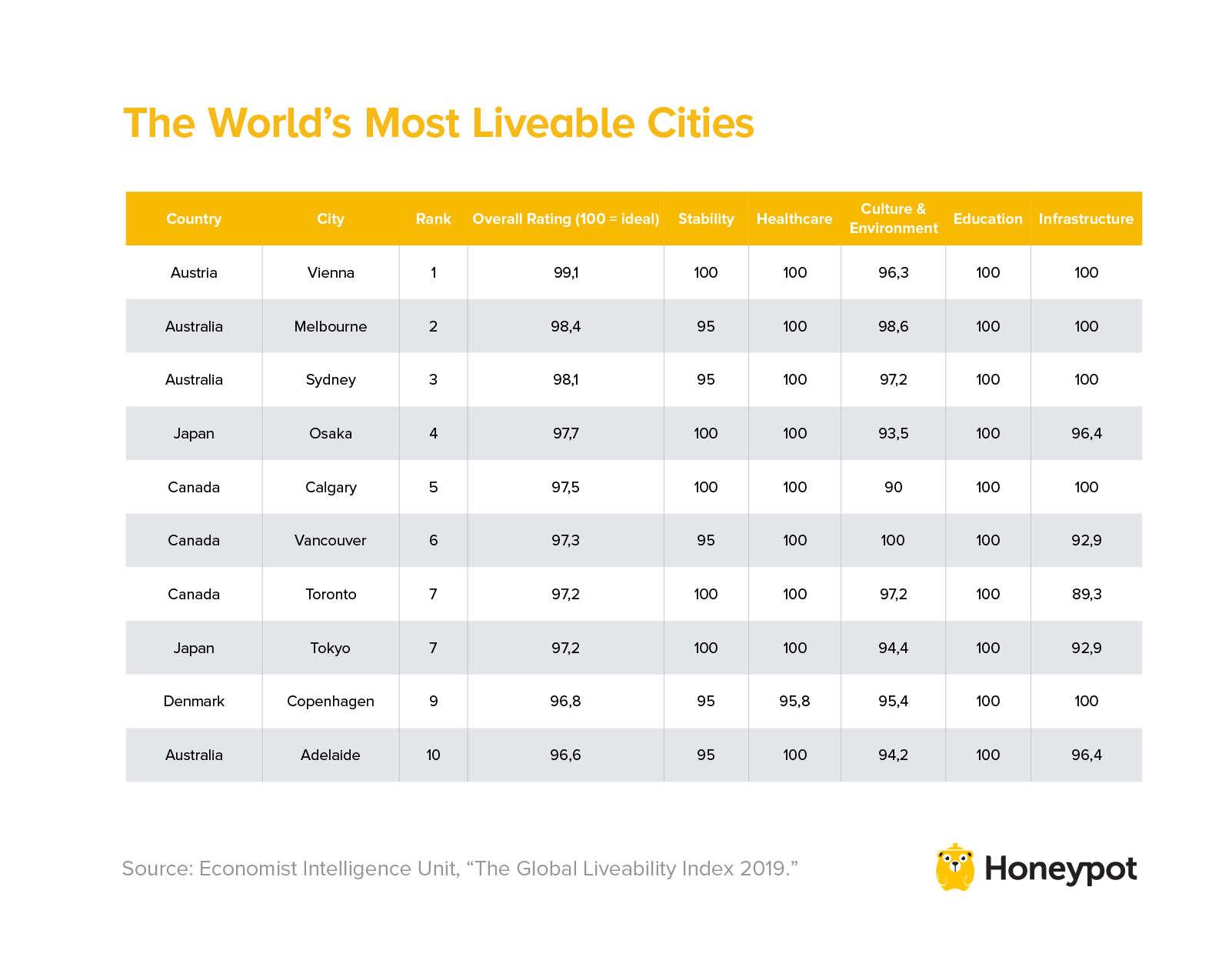 83,200 developers are currently living in Vienna, which accounts for about 80% of all the developers in Austria. Despite the large concentration of developers, the number of meetups in the city is still relatively small in comparison to other European cities. There are 0.03 meetups per developer in Vienna, compared to 0.08 in Barcelona and 0.05 in Paris.

With its location at the center of Europe, Vienna is cosmopolitan: 27% of wage earners living in Vienna are non-Austrian nationals. Many developers are recruited directly from neighbouring and nearby countries such as Hungary, Slovakia, Slovenia, Romania, Bulgaria, Croatia, Poland, and Italy. Given the international makeup of Vienna’s workforce, a large number of companies operate in English. 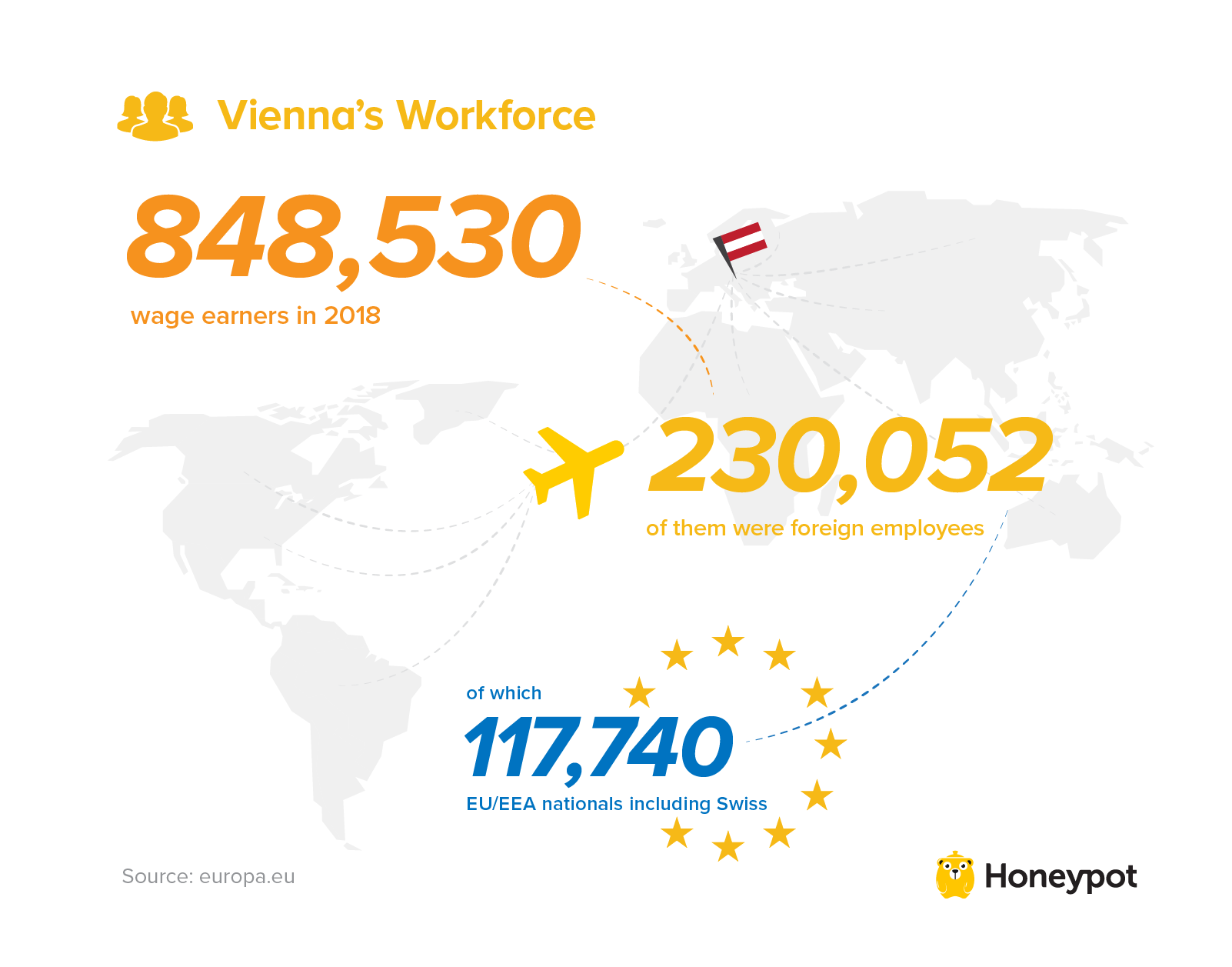 The city is also home to many non-EU developers, who can apply for two different types of visas: the Rot-Weiß-Rot (RWR) Card or the EU Blue Card. Both cover skilled workers for shortage occupations, into which software development falls. The difference between the two visas depends on the salary and educational background of the applicant.

To qualify for the Blue Card, it is important that you earn a gross annual income of at least one and a half times the average gross annual income of a full-time employee (in 2019: at least € 62,265). Honeypot’s Talent Relocation team covers both the visa cost and process for all developers hired on the platform and moving to any of our markets, including Vienna. 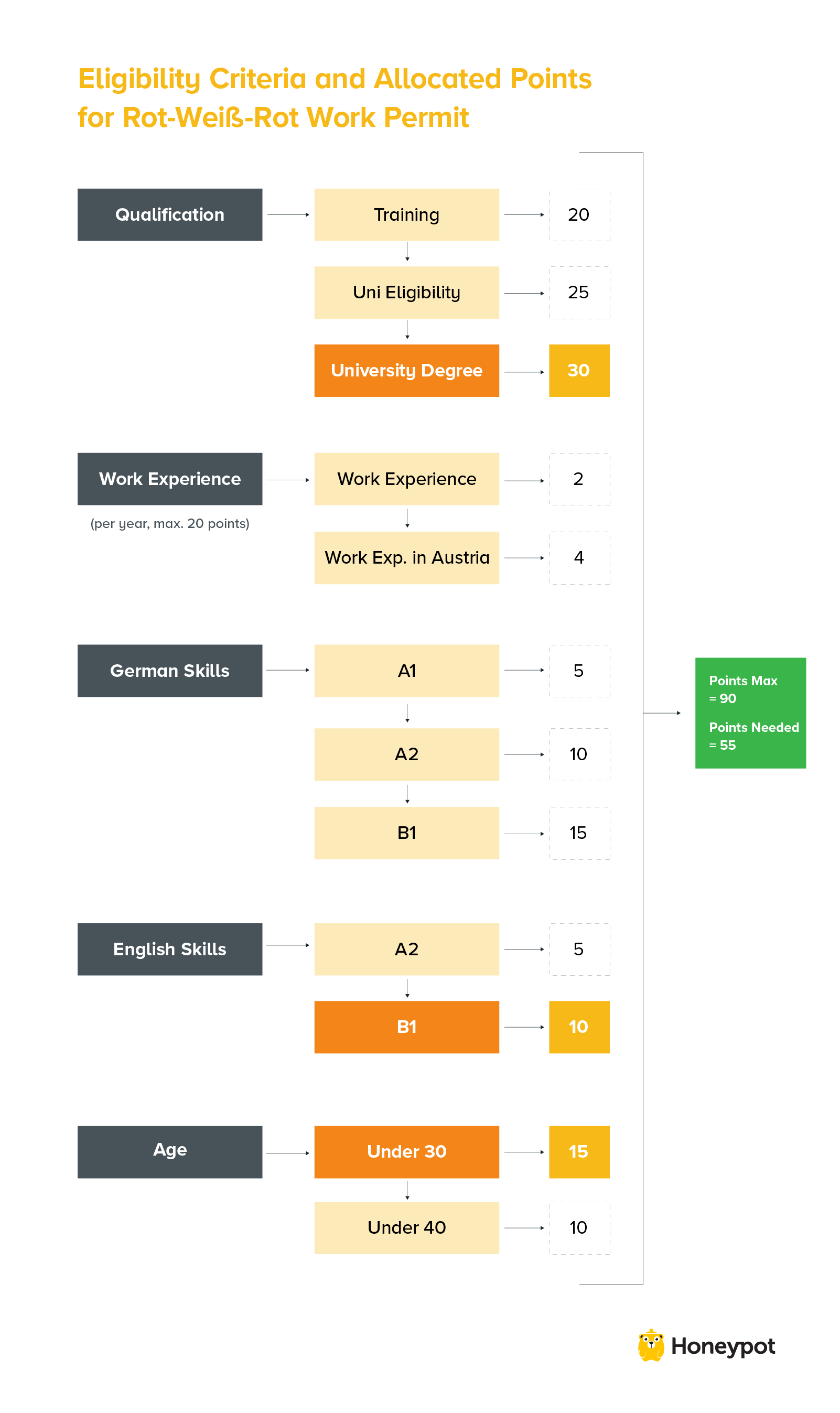 Honeypot’s launch in Vienna marks a major milestone in our growth. We aim to launch ten new markets within the next three years, and our step into Vienna is supported by a committed local team who will bring the Honeypot ethos to a local audience. Come meet us in person at our upcoming Tech Movie Night and our soon-to-be-announced launch event.

P.S Want to read what the Austrian press have to say about us?