Women in Tech: How does Germany compare to the rest of Europe?

2017 was a landmark year for women in the fight for gender equality, with the #MeToo and Time’s Up movements inspiring more women than ever before to speak up, but there’s still tremendous work to be done when it comes to the economic empowerment of women. Particularly in tech.

Concerned by the situation and eager to get a better understanding of the challenges and opportunities facing European women in the IT industry, we recently conducted a study aimed at highlighting which countries offer the best (and worst) opportunities for women in tech.

So, what interesting insights can be taken from our Women in Tech Index? Is Germany setting a good example to the rest of Europe? Which countries have taken positive steps towards gender parity? And while we’re at it, how does the tech industry compare to other industries when it comes to offering women fairer opportunities and wages?

To what extent is Germany evolving towards gender equality in tech?

Seeing as the German tech industry is booming and the government very recently implemented a new rule aiming to minimise the national gender pay gap, you’d expect Germany to be among the most attractive European tech destinations for women.

Sadly though, our data suggests otherwise.

While it’s worth mentioning that there are more female tech workers in Germany than in any other country in Europe apart from the UK, they only make up 16.58% of Germany’s overall tech workforce. That’s a lower percentage than that of 15 other European nations including France, Norway and Sweden, but also Lithuania, Romania and Bulgaria. In actual fact, the percentage of women tech workers in Bulgaria is almost twice as high as in Germany. (30.28%) 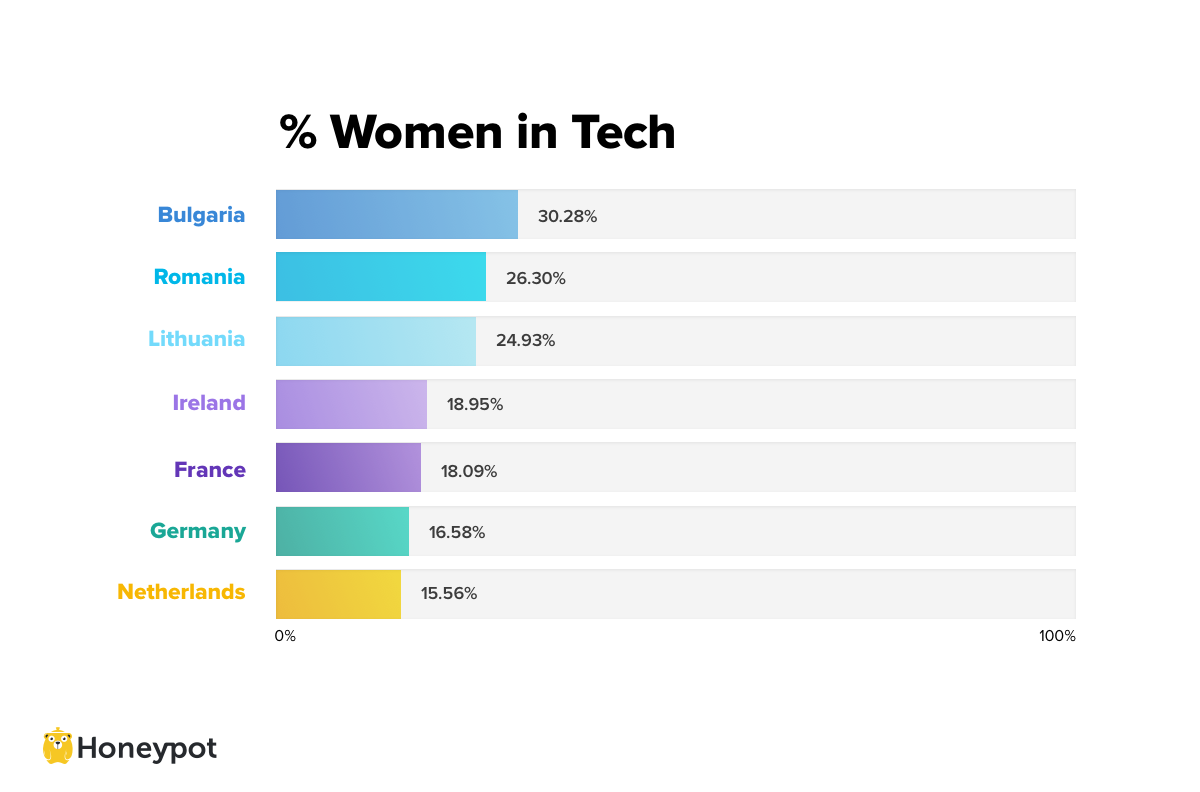 Ranked 14th in terms of average tech wages for women, practically on par with Slovenia at 44,292€ per annum, Germany has some way to go to compete effectively with other Western European countries.

Our data suggests that the German gender pay gap in tech is among the worst on the continent, with only Greece, Poland, Estonia, Slovakia, Lithuania and the Czech Republic ranking lower. To be precise, on average, male tech workers in Germany earn almost 15,000€ more per year than their female counterparts. 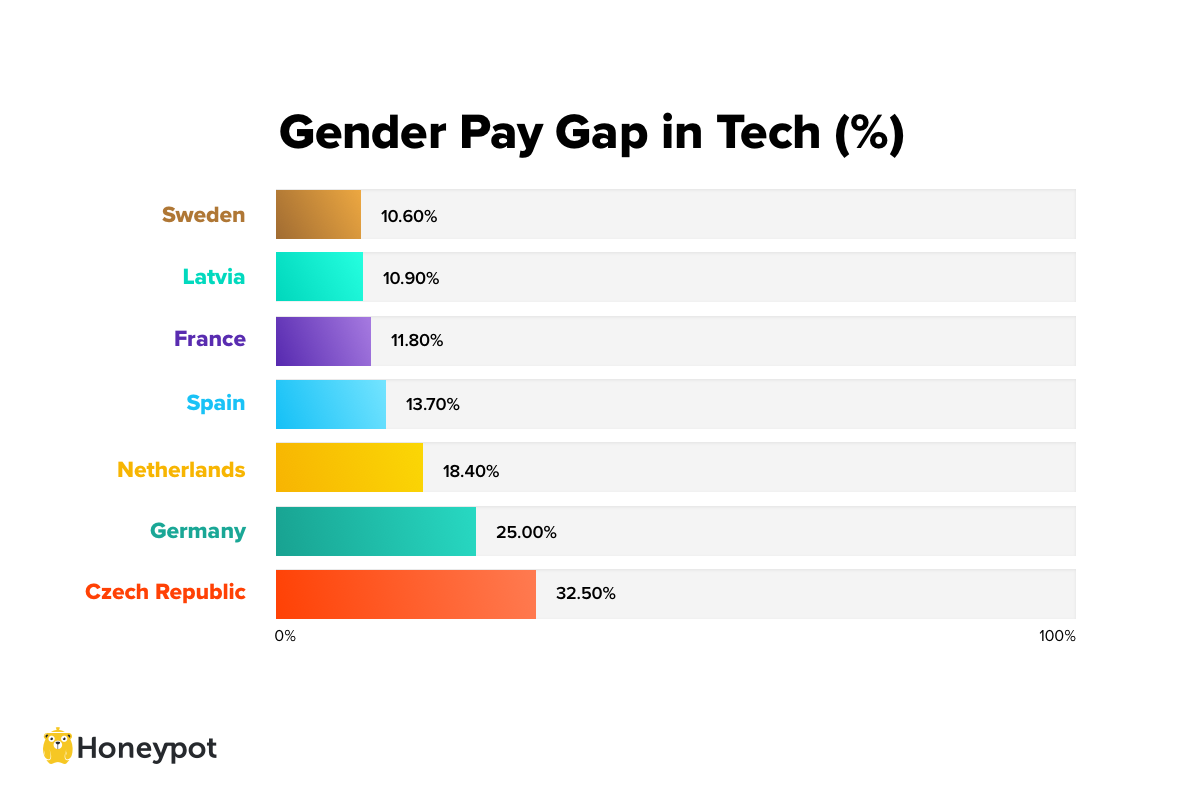 Further, it seems Germany’s struggles with gender parity in the tech field have deep roots. While a third of Italy’s science, technology, engineering, and mathematics (STEM) graduates are female, women in Germany account for little over 21.26% of all STEM grads.

While Germany’s troubles are worrying, it is still a very attractive country in terms of job opportunities, particularly given its unique composition between innovative startups and market-leading corporate.

Germany can look to other European countries, that have taken decisive steps towards gender parity.

Eastern European countries are paving the way for change

There’s been a lot of talk in tech-related media about Eastern Europe’s surprising new tech hub, and rightly so.

According to the European Digital City Index, 13 Eastern European cities rank as having the best ecosystems for startups and an increasing number of Eastern European technology companies are establishing headquarters in Silicon Valley.

But while Eastern European tech companies were already known for being innovative and highly ambitious, few would have guessed they’d be among the most women-friendly tech businesses across the continent. Nonetheless, our data suggests Eastern European countries offer some of the best opportunities for women in tech.

Bulgaria, Romania, Lithuania and Latvia make up the 4 countries with the highest percentage of female tech workers in Europe (ranging from 24.87% in Latvia to 30.28% in Bulgaria) and 2 of the 6 highest ranked countries in terms of female STEM grads are located in the East.

More precisely though, if there’s one country in the bunch that stands out from the crowd, it’s Latvia. The Baltic state is only second to Sweden in the ranking of countries with the lowest gender pay gap in tech and is 1 of only 9 European countries to boast a smaller pay gap in tech than in all other industries. In other words, female tech workers in Latvia have fairer wages than women working in other industries in the country. 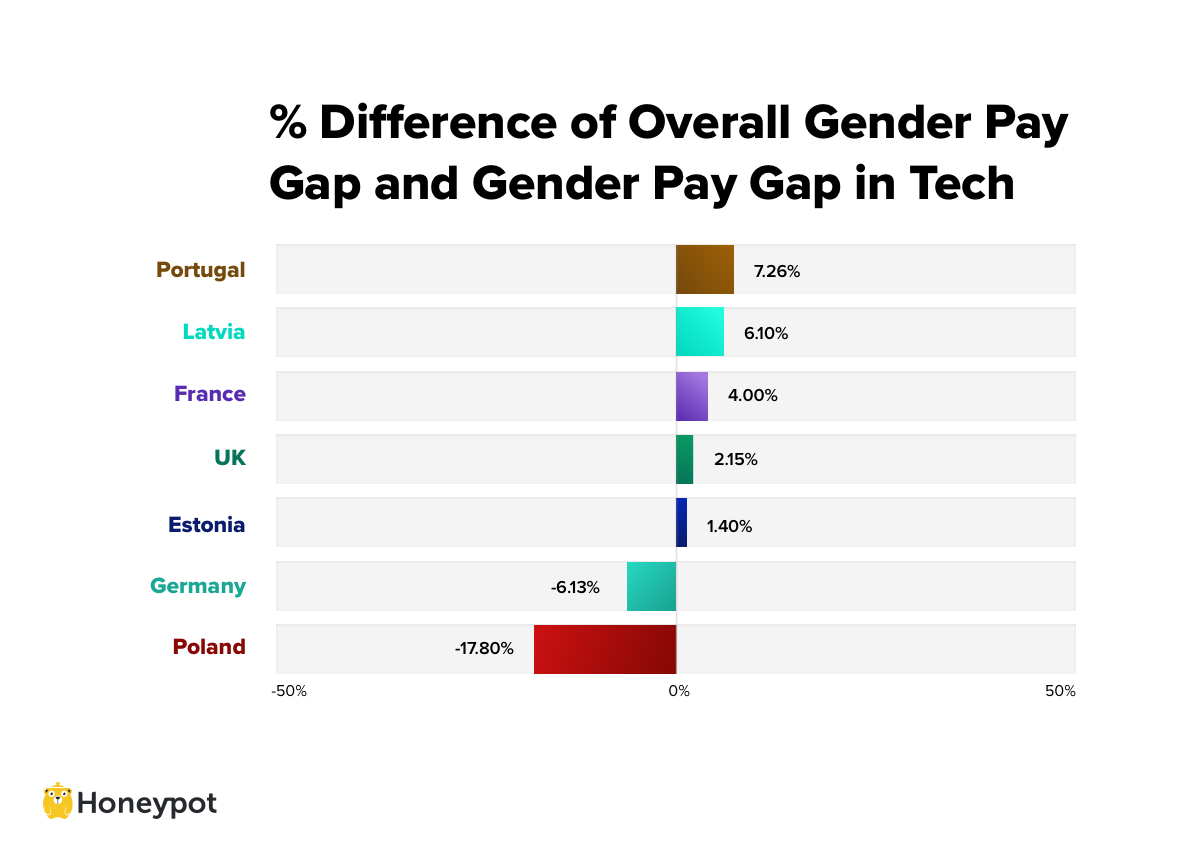 Our study shows that the proportion of female tech workers remains under 30% across the continent, which underlines how important it is that we inspire more women to seek out opportunities in tech.

Germany, especially, needs strong female and male technical leaders to encourage and grow opportunities for women in tech. There are a number of grassroots global organisations operating in Germany, such as WomenWhoCode, GeeksGirlsCarrots and WomenTechmakers, who are pushing for more opportunities for female developers and other engineering talent. We intend to continue to push for more equality too.

The report also shows that countries such as Latvia, Sweden and Finland are genuinely making strides towards parity both in the tech industry and in general, and we can only hope that their example will serve as a catalyst for Germany and the remaining European nations to address their wage disparities.